Chances are you’ve heard of The Nutcracker and the Mouse King and ‘Twas the Night Before Christmas.  They’re wonderful stories that have been shared for generations. But what if you’re looking for a tale that celebrates the season and African-American culture? Here are 10 picture books to consider adding to your holiday book list that salute Christmas, Kwanzaa and New Year’s Day. “Parents looking for books on sharing will find this an appealing exploration of the subject, teachers seeking picture books set during the Depression will find many details that bring the period to life. A gentle lesson that plays into the spirit of the holiday.”

“Full of humorous dialogue and scenes of realistic family life showing the close bonds within the family. Pinkney’s watercolor illustrations are masterful, as always…” “In rhyming text and vibrant illustrations, this upbeat story celebrates family, community, and multiculturalism, highlighting an African American family’s New Year’s food traditions, including “lucky” black-eyed peas. Grandma has prepared a delicious meal, but something is missing: “‘Mercy!’ cries Grandma. ‘I’m weak in the knees. I cooked lots of food, but forgot black-eyed peas!’” Young Shanté is sent to check with the neighbors: Miss Lee, who is Chinese; grocer MacGhee, from Scotland; Shanté’s friend Hari, who is Hindu. None of them have peas, but on her visits, Shanté learns about their celebratory food traditions—from dumplings to haggis and cheese. Finally, she finds peas, which Grandma prepares, and the neighbors happily share at the festive dinner. The story, with abundant dialogue, is written in couplets, with all lines ending in a long “e” sound, and the expressive art warmly portrays characters’ interactions in bright, rich hues and lively detail. Notes on a few other culture’s special New Year foods and a recipe for Grandma’s hoppin’ John are appended.”

Under the Christmas Tree by Nikki Grimes, illustrated by Kadir Nelson

“Grimes and Nelson are ideal collaborators for this celebration of the sights, sounds, and feelings of Christmas from a child’s point of view. Twenty-three poems take readers through the season, focusing on the life of an urban African-American family. The selections capture the excitement and wonder (“Slightly giddy/And primed/For miracles”) as well as humor (“Christmas-His cradle/Is empty. Did He grow up?/Is He Santa now?”) and wisdom. Nelson’s realistic paintings in rich, muted colors and soft textures masterfully portray the warmth and joy of the selections. This is a treasure that families will want to share every year.” “A different look at the Christmas holiday is presented in this picture book. A young African American boy reflects on the joys of the Christmas holidays-no school, special foods, decorated trees, and lots of presents-when he begins to think about trees cut down, animals slaughtered for Christmas dinner, and the hungry and homeless. He then thinks of ways to improve Christmas-feeding animals, sharing toys with the less fortunate, and giving warm clothing and food to the homeless. [T]he message… is… an important one. The colorful illustrations are excellent. They carry well and do a good job conveying the story. An author’s note provides readers with ideas for helping others. There is also a short bibliography listing five titles for further reading. This is a worthwhile Christmas title for most collections.”

The Story of Kwanzaa by Donna L. Washington, illustrated by Stephen Taylor

“Beginning with ancestors in Africa, Washington explains the history leading up to the creation of Kwanzaa, following it through slavery and on to the civil rights movement, when activist Dr. Maulana Karenga came up with the idea of an African American festival. The author explains the principle behind each of the seven days of the celebration and notes some of the objects and activities used during the holiday . . . ”

Baby Jesus Like My Brother by Margery W. Brown, illustrated by George Ford “Keisha and her younger brother Tony go downtown with the Boys Club to look at the
Christmas decorations in the windows of the downtown stores. During their walk,
Tony asks a lot of questions about Christmas, Jesus, and the meaning behind many holiday
traditions. Keisha, still a child herself, answers the questions as best she can as
the two discuss the true meaning of Christmas.

Ford’s illustrations are simply beautiful and are a nice accompaniment to this cute
story. If you are looking for a book that provides an accurate Biblical account of Jesus
and his birth then this is probably not the book for you. But if you are looking for a
feel good story, which highlights the special relationship between siblings and presents
the story of Christmas from a child’s point of view, then this book is a worthy addition
to any child’s library.” “. . . This latest title is an original folktale that will help introduce children to the holiday’s seven principles, while also suggesting how Kente cloth was first created. In a Ghanian village, a father’s will commands that his seven argumentative sons must make gold from silk thread “by the time the moon rises,” without fighting. Working together, the brothers create a tapestry of Kente cloth, the first multicolored cloth the village has seen, which they sell to the king’s treasurer for gold, before returning to their village to farm and live harmoniously. Well-paced, the story incorporates the Kwanzaa values without spelling them out too much. Minter’s attractively composed, dramatic painted linocuts, with strong community images and lively, silhouetted figures, root the story in a sun-drenched, magical landscape that will draw children even after repeated readings. An introductory section, with glossary and pronunciation guide explaining the principles, and an appended craft activity round out the volume.” “This unusual book shows life on a Virginia plantation in 1859. Beginning after the harvest is in, the narrative describes the preparations for the Christmas season and the celebrations that follow. The differences in resources, lifestyles, and traditions between the plantation owner’s family and the slaves provides a continuous contrast. Although the slaves’ hardships are evident, they are not sensationalized, and the slaves’ relationships with Massa and Missus in the big house are drawn with more subtlety than in many other children’s books on the period. The final scenes use ironic foreshadowing: the master tells his young daughter that she’ll be old enough to have her own slave in 1865, and in the quarters, a mother tells her son not to speak of running away, because she has heard rumors of freedom coming. Dramatic, full-color illustrations throughout the book offer windows on the period, showing individualized portraits of the characters at work, at rest, and at play. Some may find this a romanticized picture of slavery, but appended notes provide background information and show the authors’ research on the period.”

Irene Jennie and the Christmas Masquerade: The Johnkankus by Irene Smalls, illustrated by Melodye Rosales 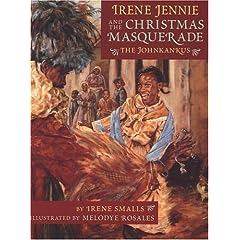 “In the tradition of the McKissacks’ Christmas in the Big House, Christmas in the Quarters (1994), this glowingly illustrated book puts a gentler face on life during slavery. Irene Jennie wakes up on Christmas day missing her parents, who have been loaned by the master to work on another plantation. She prays for their early return but also finds solace in the arrival of the wild paraders known as the Johnkankus. These slaves, who don feather masks and inventive costumes, dance and play their musical instruments to the delight of the other slaves, who revel in the extravagance of the moment. Then, happily, Irene Jennie’s parents return home early, so she can enjoy the rest of the day with them . . . Rosales’ pictures are lovely, quiet in the moments when Irene Jennie is missing her parents, yet able to capture the frenzy that arrives with the dancers, acrobats, and musicians who make up the Johnkankus. Because it’s Christmas, everyone here is smiling and happy, and the darker side of slavery seems very far away.”

“During the last week of December, Kwanzaa is a time to dress up in African clothes and gather together with relatives from all over the country. Grandma brings special things to eat, Grandpa lights the candles, and everyone in the family celebrates their heritage.”

Kelly Starling Lyons is the author of One Million Men and Me (Just Us Books, 2007) and NEATE: Eddie’s Ordeal (Just Us Books, 2004). She has two forthcoming picture books with G.P. Putnam’s Sons. Visit her at www.kellystarlinglyons.com.

2 thoughts on “Shades of the Season”