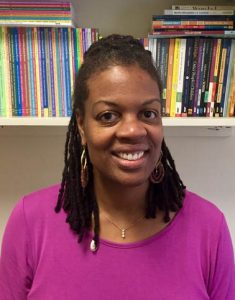 Valerie Bolling is not only a talented educator and debut picture book author, she’s a marketing dynamo and caring advocate for others. The media section of her website has links to dozens of interviews she did to promote Let’s Dance! (illustrated by Maine Diaz, published by Boyds Mills Press). Zoom readalouds, panel discussions, author visits, Valerie has done it all.

Even with that packed promotional schedule, she makes time to recommend the books of fellow authors to libraries and for book awards.  She’s part of author collectives and reviews the work of her peers to help their books get the shine they deserve. We’re thrilled to put Valerie in the spotlight and salute her literary contributions. With four books on the way, she’s already making her mark. We can’t wait to see what magic she brings next.

Please join us in celebrating Valerie Bolling on Day 13:

My path to children’s book writing has led me on an exhilarating journey. Writing inspires me. During this pandemic, it has been a balm for me, offering solace, joy, and a way to occupy time that I can’t spend with others.

I first considered writing books for children during a weeklong visit with my nieces in December 2016. I thought of story ideas in which each girl was the protagonist. After their visit, I wrote those stories. I then decided I wanted to write other stories and investigate the possibility of having them published. That was one of the goals I set for 2017.

I wrote more stories and took a class at Westport Writers’ Workshop from March – June 2017, during which I workshopped several stories. Soon after that class, I wrote LET’S DANCE! It was originally called I LOVE TO DANCE, but after revising it (based on feedback from an author-librarian-storyteller-friend), the current title seemed a better fit.

A particular struggle for me was that even though LET’S DANCE! was acquired relatively quickly (within six months of querying), none of my other stories seemed to garner interest. As much as I was excited to have a book in the publication pipeline, I was discouraged not having another book immediately following it. I began to feel like an imposter and questioned if I’d just gotten lucky. I didn’t want to be a “one-book wonder.” 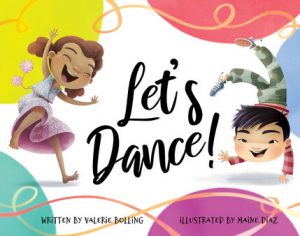 Fortunately, my struggle turned into a surprise when I connected with my agent. On June 1, 2020, I reached out to James McGowan, of BookEnds Literary Agency, via DM on Twitter, in response to his offer to answer questions from Black writers in support of #BVM. I asked if he’d be willing to provide specific feedback on a story I’d sent him in December 2019 that wasn’t a fit for him. I was surprised when James promptly responded with, “Thanks so much for getting back in touch with me. Your name has been on my radar recently, since we share a publisher (and even an editor) … I’d love to reconsider and see more.” I sent James the manuscript for which I’d requested feedback as well as two others.

I was shocked when I received an email the next morning in which James said, “I still absolutely love your writing,” and he described the writing in one of my manuscripts as “utterly beautiful.” I was beaming, but the sentence that floored me the most was, “I would love the opportunity to speak with you about these manuscripts and possible representation if you’re interested?”

I was totally caught off guard! I had simply reached out to James to get feedback on one manuscript that I knew didn’t interest him. In no way was I expecting an offer of representation.

Soon after signing with him, James went on submission with one of my manuscripts, and it resulted in two two-book deals from different publishers (no formal announcement yet, so I can’t give more details, except to say that two are to be released in 2022 and two in 2023). That was both a surprise and a success!

Who doesn’t love to dance? I wanted to write about a topic that many people, regardless of age and background, enjoy. Dance seemed to be an obvious choice. Turn on music and watch people move and groove. Even babies who can barely walk will sway and/or raise their hands. I wanted the message to be clear that anyone – no matter who you are – can dance, although we all do it a bit differently … with our unique flair. Maine Diaz’s brilliant illustrations highlight the joy of dance as well as my vision for diversity and inclusiveness.

The first sentence of my pitch for LET’S DANCE! was “Dancing is a universal language, even though we all have different ‘accents.’” My pitch captured the attention of Jes Negrón, an editor at Boyds Mills & Kane, during a Twitter pitch party (#PBPitch) in June 2018. She “liked” it, and when I sent her the manuscript, she expressed her desire to acquire it. I accepted her offer, and LET’S DANCE! was on its way to publication!

Two moments about this experience were particularly rewarding for me. First was Jes’ vision for LET’S DANCE!. She elevated my idea for a diverse, inclusive book to one that embraced a more global theme. Where I saw “Tappity-tap/Fingers snap” as tap dance, she imagined flamenco from Spain. I thought electric slide or cha cha slide would accompany “Glide and slide/Side to side,” but Jes suggested long sleeve dancing from China. What’s amazing is that none of my words had to change. Jes simply matched my language to cultural dances.

The second special moment was holding LET’S DANCE! in my hands. What I focused on most was not my words but Maine’s gorgeous illustrations. Though I had seen sketches along the way, they didn’t prepare me for the masterpieces Maine created from cover to end pages to spreads to backmatter. The illustration that most surprised and pleased me, however, was the ballet spread because it clearly manifests my vision for diversity. Traditionally, ballerinas are white, female, and thin. This spread has a girl in hijab, a dancer of African descent (reminiscent of Misty Copeland), and a child whose gender is indiscernible. That child was a super-special surprise because I had said to Jes, “I want a boy in a tutu.” The fact that the child’s gender isn’t clear is even better!

I was blessed not to have any significant challenges throughout the publication process. What was most laborious was writing the backmatter. It was Jes’ suggestion to add it, and I’m pleased she did because it offers an informational dimension to the book. It was not easy, however, to describe each dance – a couple of which I had to learn about myself – in two sentences of kid-friendly language.

I’m grateful that a number of readers have reviewed LET’S DANCE! on their blogs and on Amazon and Goodreads. My book reviews and interviews are posted on my website as well as a book trailer and my YouTube channel, Let’s Dance! While Learning.

Though I’m appreciative of any “buzz” about LET’S DANCE!, true success for me is children’s enjoyment of the book. When parents, teachers, and librarians take the time to share stories with me about how much a child loves my book, that means more to me than an “official” book review.

A friend recently told me that when her nine-month-old baby is in a “grumpy mood,” LET’S DANCE! is the remedy to turn her mood around. She said, “It’s the only book – the only thing – that will cheer her up.”

After reading LET’S DANCE! to a group of 6th graders on World Read Aloud Day 2020, the school librarian shared with me that a student asked to check out the book because he wanted to share it with his younger sister.

The day after Christmas, I received this email: “My granddaughter LOVES your book! She asked me to read it to her as soon as she opened the box (that also contained a unicorn tutu and gold glitter dance shoes). She requested that I read it again, twice, as her bedtime story last night.”

Those anecdotes are my measures of success. Children are the reason I write, and when they want to read LET’S DANCE!, I am thrilled. Their enjoyment makes me dance! It also makes me excited that I have more books that will be published for them to enjoy.

KidLit in Color is a group of traditionally published BIPOC creatives. We nurture one another, amplify diverse voices, and advocate for equitable representation in the industry. We promote and celebrate each other’s books by actively boosting each other on social media and reviewing and purchasing each other’s books. We have a website and a newsletter, and we do giveaways.

Each member of this group is a rising star. I’m not saying this because these are my author-sisters; I’m saying this because I’ve read their amazing books. Check out our website (and our authors’ books!); sign up for our newsletter; and follow us on Twitter and Instagram.

Learn more about Valerie’s inspirations and great work at her website.