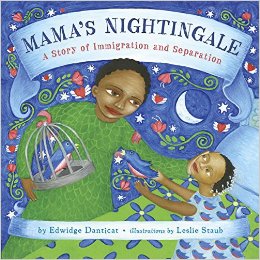 In MAMA’S NIGHTINGALE, award-winning author Edwidge Danticat, who was born in Port-au-Prince, Haiti and grew up in New York, tells a timely and finely wrought tale in English and Kreyol of a daughter who is empowered to become an advocate on her mother’s behalf. From the publisher: “After Saya’s mother is sent to an immigration detention center, Saya finds comfort in listening to her mother’s warm greeting on their answering machine. To ease the distance between them while she’s in jail, Mama begins sending Saya bedtime stories inspired by Haitian folklore on cassette tape. Moved by her mother’s tales and her father’s attempts to reunite their family, Saya writes a story of her own—one that just might bring her mother home for good.”

School Library Journal, in a starred review, notes that “Danticat, who was born in Haiti, was separated from her parents until she was 12 years old and beautifully conveys a story about loss and grief and hope and joy.” Kirkus, in naming it a Best Book of 2015, called MAMA’s NIGHTINGALE a “must-read”, writes that “this picture book sheds light on an important reality rarely portrayed in children’s books.”

The International Literacy Association shares ideas for classroom use, and Teaching Latin America Through Literacy offers an extensive analysis of the text and imagery as well as a wealth of resources for lessons and more.