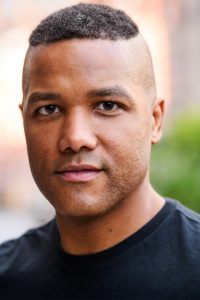 A litany of awards

For which we give honor

I came to publishing in a roundabout way. I have a PhD in Political Theory and also a law degree. I have been a law professor at Syracuse University for 15 years, and I have been writing and editing for the New York Times for nine years.

My first kind of published writing was academic. I truly appreciate dusty libraries: their smell, their quiet, and their promise. It’s great to know that all these people before me have worked really hard to have their work published, and it can be on the most narrow and pointy of subjects, but it is preserved in the library. It’s like going on a treasure hunt to see what you can find, and you are pulling together all of these different sources to come up with something new. I really enjoy diving into a subject deeply, and picking up the crumbs of research that other people have dropped, and seeing what more there is to say.

So I’d definitely say that I’m a big nerd. Schools are my favorite place in the world, or just any place where people like to read and write about really random subjects. That’s what I love about academia–you can get a crazy idea in your head, and then just go to town with it.

The drawback to this kind of intense intellectualism is that few people ever read it. That’s mainly the reason I started the journalism angle. I was still writing on all the same topics, except this time around, the audience was bigger.

It wasn’t until I had children of my own that I started thinking about writing children’s books. At the Times, I was editing an opinion forum on politics in children’s literature, and I got Jabari Asim to write a piece for me. I had bought a couple of his board books about black kids for my young son, and I was looking for all kinds of diverse books, and coming up rather short. I could find books about African-Americsns and Asians, but when it came to finding any kind of modern book about Native Americans, there was almost nothing. I’m an enrolled member of the Seminole Nation of Oklahoma. It was appalling–hundreds of books about happy, dead Indians celebrating the first Thanksgiving, but absolutely nothing on any Native kids learning to tie their shoes, or refusing naps, or going to visit their cousins. So after getting rather incensed about this lack of representation of Native Americans, I emailed Jabari and asked him what I could do about it. When I look back on it, it’s pretty naive, to sit up and say “okay, I’m going to write a children’s book now,” but I didn’t see too many others doing it, so I pushed ahead. We still have a ways to go, but these days, we have a good quorum of Native writers! 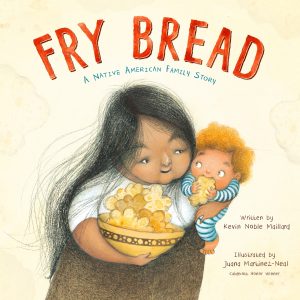 I would buy a soft cover moleskine for each new project. Not a big thick one, but one of these that has about 50 pages in it, it always start out with a list of words that I would like to include: sovereign, arise, homeland. probably won’t keep all of those words, but the starter list points me in a certain direction.

I’m really picky about aesthetics when I write. I can’t write in a plain room with white walls, a chair, and a table. It would feel like one of those municipal rooms that you see on cop TV shows, with florescent lighting. Place is so important to me (while also being a very good excuse for not writing if I can’t find anywhere good). But I live in Manhattan, and there are so many options behind coffee shops. I don’t drink caffeine anyway. I’d rather nap. The best places, hands down, to write, are churches. But for me, of course, it has to be a really beautiful church. It’s free. It’s quiet. Nobody will kick you out for being black or not buying a $7 latte. And nobody is ever going to steal your stuff!

But I recently got my own studio in Greenpoint, Brooklyn, where I can write and paint. It has high ceilings and wood floors, and is in an artists’ collective across the street from an abandoned scrap yard and a water treatment facility. I love it. It only takes twenty minutes to get there, but it’s like a different, post-apocalyptic planet.

I painted one of the walls in green chalkboard, and I framed sixteen black and white pictures of my favorite artists, activists, and writers to go above it. I realize that this looks like an old schoolroom, but I really love school, remember? I have Vine Deloria, Edith Wharton, Nella Larsen, and Maya Angelou. Most of them are dead, like Vita Sackville-West, or Josephine Baker, but Kehinde Wikey and Alice Walker are so good, that I couldn’t leave them out of the pantheon. 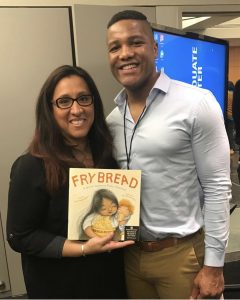 I started out writing Fry Bread for my own children and other kids that weren’t seeing themselves on the pages. All I wanted was to write a simple board book that had brown faces and rhymed. My editor steered me toward something more lyrical and abstract. So I ended up writing a poem, and four years later, we have gotten positive responses.

We got six starred reviews, and made a lot of end-of year “best” lists. On the traditional awards side, we won a Charlotte Huck Recommended, Charlotte Zolotow Honor, American Indian Youth Literature Honor, and Robert F. Sibert Medal.

This response was definitely more than I was ever expecting. It was a great year for recognizing Native works. This was the first year that the Indian Youth Literature Awards were announced at the big ceremony, and Traci Sorrell (Cherokee) won three of those, and also an Odyssey Honor for the audio recording of “We Are Grateful: Otsaliheliga.”

State of the Industry

I think the next big step beyond representation is normalization of diverse narratives as central to human understanding. I don’t think that all of the books with black kids at the center have to be focused on black identity, and the same would go for Asian books being about Asian foods, holidays, or cultural difference. Two of my favorite newer books are Jabari Jumps by Gaia Cornwall and One Hug by Katrina Moore. They both feature diverse characters at the center, but their experiences are universal: bravery at the diving board and affection with the family. What is most interesting are the subversive side narratives taking place without the authors going through expositional dialogue about, “black people swim” and “Asians show affection.” I love quiet, indirect demonstration of big issues, and I’d like to see more subtlety in diverse books. How do these characters do regular kid things, like the maddening incapability of cleaning their rooms and selectively listening to their parents? Do they adopt stray dogs, or have peanut allergies? Do they ever get shy about wearing new clothes to school, or do they daydream about a new bike? All that, while being brown and lovely and even a little bit silly? I don’t think we have to be good blacks, gentle Indians, or model minorities all the time in our push for inclusion. Kids get sad, mad, shy, tired, and crazy, and these completely normal and universal experiences are worth sharing from many angles. Diverse books should be emotional as well as topical, and most of all real. Kids definitely love superheros and legends, but they also need to really, really see themselves in books, and that includes addressing all of their beautiful faults. For me, that’s the next level in publishing.