As a kid growing up in Pittsburgh, Jewell Parker Rhodes was the one who always had a book in her hands. Books were better than dolls, she writes on her website, better than food. It’s no wonder  she wrote her first children’s book while still in  elementary school. She illustrated it and shared it with her classmates. The magic of creating a story herself ignited  a lifelong passion for writing.

Rhodes went on to write five acclaimed novels for adults, a memoir and two writing guides. She became the Piper Endowed Chair of the Virginia G. Piper Center for Creative Writing at Arizona State University. But she was missing something. When Hurricane Katrina hit, a question haunted her: What about the children?  Three years later, with Hurricane Ike threatening New Orleans again, she heard a voice: “They say I was born with a caul, a skin netting covering my face like a glove . . .”

That voice of her main character Lanesha inspired Rhodes’ debut middle-grade novel, Ninth Ward (Little, Brown Books for Young Readers). The book has won big praise from a Publisher’s Weekly starred review to a Coretta Scott King Author Honor Award and Parents Choice Foundation Gold Award. “My entire life has been a journey on the way to writing Ninth Ward,” Rhodes shares on her website. ” Grandmother, my community, and teachers and librarians showered me with guidance and love. They all gave birth to Lanesha. A girl with hope, a big heart, and a firm belief that always, eventually, ‘The universe shines down with love.'”

We are proud to celebrate Jewell Parker Rhodes on Day 26:

You’re an award-winning author of novels for adults. On your website, you share that writing a children’s book is a dream come true for you. Why?

My childhood was difficult.  Books and my Grandmother’s “porch stories” stirred my imagination and kept my spirit alive.  I always wanted to write a story that perhaps, one day, would inspire a child when they needed it most.

You wrote your first children’s book at eight years old. Here’s what you say about it on your website:  “It was a very thin book, bound in yellow construction paper, and illustrated by me!” How did that early experience put you on the path to publication?

My teacher brilliantly arranged for me to read my story, “The Last Scream,” to my elementary school classmates.  It was an amazing experience to see, feel, and hear my classmates’ responses.  I had always valued the connection and communication I felt with books and with different authors, but reading to my classmates, I felt the power of my own storytelling.

It took four decades for you to write your next children’s book — the middle-grade novel, Ninth Ward. Why was now the right time to write for kids? Why did the story of Hurricane Katrina call to you?

As an adult novelist, I’ve been writing about Louisiana for decades. I feel such a “calling” for the landscape, the music, and the food. When Hurrican 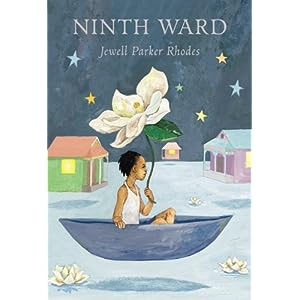 e Katrina hit, I worried and wondered about the children. But it wasn’t until 2008, when Hurricane Ike was bearing down upon New Orleans, that I thought, “Oh no, not again.” This time, Lanesha’s voice popped inside my head. I needed her voice to begin writing.

You share a parallel between your life and your main character Lanesha’s — both of you were raised by amazing elders. How did your Grandmother Ernestine inspire Lanesha’s caregiver, Mama Ya Ya?

Mama Ya Ya is based on my Grandmother Ernestine.  Grandmother gave me “unconditional love” and she taught me my values:  “Do good,” she’d say, “and it’ll fly right back to you;”  “Respect yourself.  Wear clean underwear;”  “Dream big, Jewell, child.”  Grandmother also taught me that the world was a good place and that I should use my intelligence, my senses, and empathy to thrive.  Grandma was the neighborhood “griot,” and, by telling her oral tales, she encouraged my profession.

What feedback have you received about Ninth Ward? From children? From adults? How does that make you feel?

I’ve been lucky to receive lots of love and appreciation.  Children tell me that they’ve never read a story like mine before!  I think they like how a girl, Lanesha, a boy, TaShon, and a dog, Spot, can band together and become a “family,” depending upon one another to survive.  Adults often tell me how much they appreciate my writing (I really did my best!) and how the story is pro-school and shows how Lanesha uses her language and math skills and her spiritual strength to endure, survive, and thrive during Hurricane Katrina and the levees breaking.

Ninth Ward just won a Coretta Scott King Author Honor. Congratulations! What did that achievement mean to you? How do you measure success?

I’m thrilled by the Coretta Scott King recognition!  When I heard, I shrieked, did a happy dance and called my loved ones.  For me, the award celebrates how I honored the glorious spirit and heritage of African Americans.  I want our children to read about Lanesha and TaShon and know that they, too, are as heroic and resilient.  Ninth Ward is very much a love song to our community and to the people of New Orleans.

What moments along your writing journey do you treasure? What moments have been most challenging?

When I’m writing, I love to discover new details about my characters.  I love when they behave in unexpected ways.  Douglass’ Women, Magic City, Voodoo Dreams—my historical novels—were long, fascinating journeys into

African American history and heritage.  But, all the main characters, at one time or another, surprised me.  This, I think, means that my characters had come alive, had begun to “live” not just inside, but, outside my imagination.

The most challenging moments during the writing process always come near the end.  I may have spent years working on a book.  I’ll have grown tired, cranky, and uninspired.  That’s when, as a writer, I have to dig deep.  I have to re-ignite my creativity and remain true to my artistic standards.   Writing can be like running a marathon.  Everyone can start the race, but it’s how you finish that counts most.

What’s your mission as a children’s book author?

My mission is to write my very best.  Children deserve no less.

You’ve written two guides on writing, Free Within Ourselves: Fiction Lessons for Black Authors and The African-American Guide to Writing and Publishing Non-Fiction. What advice do you give to aspiring authors? How can they turn their dream of writing for children into reality?

I’ve written for adults and children.  I’ve written plays, fiction, and nonfiction.  My basic advice is always the same:

“A writer doesn’t talk about writing.  A writer writes.”  So many people grow fearful of their dreams and ultimately, don’t really try.  Or else they sabotage themselves.  Keep a journal.  Set aside a few hours a week to write.  Most importantly, believe in yourself.  I’d also add “A writer reads.”  Books can teach effective, writing skills.  When you read something you’ve enjoyed, ask yourself, how did the writer do that?  Eventually, through analyzing, you’ll teach yourself patterns and ways of writing well.

On your children’s site you mention that you finished the draft of a young adult novel and are working on a middle-grade adventure tale. Can you give us a hint of what’s to come?

My new middle grade novel will also be set in Louisiana; but, instead of the twenty-first century, it’s set in the nineteenth century.  It’s all about a spunky little girl named Sugar.  I’ve also finished a draft of a young adult novel; it’s going to be part of a gothic trilogy.

Being alive.  Being a mother.  Being a wife.  Having imaginative dreams.

The Buzz on Ninth Ward:

“New Orleans during Hurricane Katrina is the setting for this tense novel that blends the drama of the catastrophic storm with magic realism. Twelve-year-old Lanesha’s teenage mother died while giving birth to her, and, because her mother’s wealthy uptown family won’t have anything to do with her, she is raised in the Ninth Ward by loving Mama Ya-Ya, 82, who feels like her “mother and grandmother both.” Born with a caul over her eyes, Lanesha is teased at school, but she is strengthened by her fierce caretaker’s devotion and by a teacher who inspires Lanesha to become an engineer and build bridges. Lanesha also has “second sight,” which includes an ability to see her mother’s ghost. As the storm nears and the call comes for mandatory evacuation, Mama Ya-Ya envisions that she will not survive, but Lanesha escapes the rising water in a small rowboat and even rescues others along the way. The dynamics of the diverse community enrich the survival story, and the contemporary struggle of one brave child humanizes the historic tragedy.”

“With a mix of magical and gritty realism, Rhodes’s (Voodoo Dreams) first novel for young readers imagines Hurricane Katrina and the subsequent flooding through the eyes of resourceful 12-year-old Lanesha. Lanesha lives with Mama Ya-Ya, an 82-year-old seer and midwife who delivered Lanesha and has cared for her since her teenage mother died in childbirth. Living in the Ninth Ward of New Orleans, Lanesha is viewed as an unusual child (she was born with a caul and is able to see ghosts) and is ostracized at school. Lanesha finds strength in Mama Ya-Ya’s constant love and axioms of affection and reassurance (“When the time’s right… the universe shines down love”). The story becomes gripping as the waters rise and Lanesha, with help from a young neighbor and her mother’s ghostly presence, finds a way to keep body and soul together. The spare but vivid prose, lilting dialogue, and skilled storytelling brings this tragedy to life; the powerful sense of community Rhodes evokes in the Ninth Ward prior to the storm makes the devastation and the hardships Lanesha endures all the more powerful.”