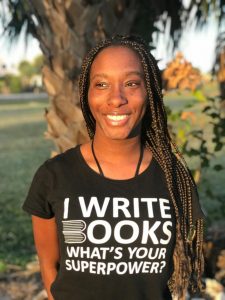 Kyandreia Jones is a Posse Miami Scholar and a Creative Writing major at Hamilton College in Clinton, New York. She was born and raised in South Florida. When she thinks of home she likes to muse that she is in a “sunshine state of mind.” Jones’ poetry and prose has been published in various college literary publications and magazines such as Red Weather, Grasping Roots, The Black List Journal and The Underground. Opportunities like having her first short story “At Home” published by Living Spring Publishers in Stories Through the Ages, College Edition 2017 inspired Jones to take her writing to new heights. Working for Choose Your Own Adventure has been the highlight of Jones’ career and she cannot wait to see what other adventures await her! Jones values reading, writing, laughing, and promoting universal kindness.

On this 7th Day of February, the Brown Bookshelf is honored to highlight:

Hello Brown Bookshelf!  Thank you for this honor, and opportunity to answer questions about my writing career, and give my opinion on various subjects concerning the world of publishing.

It is important to consider how our dreams have been built and destroyed by what we have seen to be possible. Until I wrote Choose Your Own Adventure SPIES: James Armistead Lafayette, my first published book, I had a limited idea of what was possible.

I have always loved to read and write. At an early age, my grandmother instilled a love of literature in me. She always handed me new books and before long I was dragging her to libraries and bookstores to get my own. I adored the Junie B Jones series–– “My name is Junie B. Jones. The ‘B’ stands for Beatrice. Except I don’t like Beatrice. I just like B and that’s all.” I think I loved Barbara Park’s series because Junie and I shared a last name and it was the closest I ever came, as a child, to seeing myself in books.

Most if not all of the characters were white with blonde hair and blue eyes. And because it was all pretend, I told myself it was alright that I never saw someone who looked like me, who spoke like me, or lived like me in books. Because that was just the way it was.

Not seeing characters with whom I could identify inspired me to write my own stories.

With a pen in my hand, the name I secretly called myself was “author.” I always did like the ring of that title. Part of the reason why I whispered this name into my own ears was the fact that I never saw an author who looked like me. I read a lot of books and I mean a lot. I easily read over five hundred before I reached middle school. Subtle brag, I know. But, seriously, that is a lot of books and a lot of evidence that people of color, let alone women, did not write. Or more aptly, GET PUBLISHED. Thankfully, I had a dream that would not quiet, that would not cower, that would not bend.

Books opened up worlds for me but writing taught me how to walk through them, how to make them my own and how to share those worlds with those around me.

Everyone who knows me, knows my dream. During my junior year at Hamilton College, my Posse Mentor Kathryn Doran heard that there was someone looking for new, aspiring writers. It turned out that someone was Chooseco’s Associate Publisher, Melissa Bounty. At the time, I didn’t know what Choose Your Own Adventure was or what I might write. Melissa asked me to send some writing samples and I sent her my first published short story about a black man whose country fails him, a monologue about women in the workforce, and a poem about losing innocence–––I know what you’re thinking, “Yup, those sound like wonderful topics for a potential children’s author.” Ha! I have no idea what about any of those three samples read “children’s book” to Melissa but shortly after I sent the samples, we were on the phone discussing Chooseco’s new spies series.

When asked to write a Choose Your Own Adventure® book about real spies from US History, I was particularly captivated by James Armistead Lafayette’s story. The story of James was a tale that I would have loved as a child. I knew that the United States of America was built on the backs of enslaved people but I did not know that it was also built on their intelligence. I did not know that there were real-life heroes whose stories teach children and adults alike about loyalty, about liberty, and most importantly about possibility. I would have been thrilled to learn about James, a former enslaved person turned spy, who helped America win its independence.

I am grateful that I lived in a house where I saw strong, black leads. My family and my favorite celebrities/ entertainers appeared in my early writings.

For example, I wrote about black female actresses whom I admired because they inspired me to dream and to create. In the fourth grade, I wrote my first short story about two twin sisters, Tia and Tamera (I was obsessed with Sister, Sister as a child), who gained superpowers after their pool was struck by lightning. Although I had no idea how to write–––I had only just begun to learn about narrative, expository, and persuasive writing––I knew that I loved doing it. I loved putting words on paper, watching younger versions of my favorite television sisters figure out what to do with their new powers. I enjoyed writing about Tia and Tamera because they were, in my eyes, the finest examples of fun, grace and individuality on TV. I also liked being able to play with these two incredible people on the page because I knew that it was unlikely that I would ever meet them in real-life. However, in my story, I could marvel and revel in my characters’ greatness and be inspired by the real-life Tia and Tamera in a whole new way.

I will also never forget the excitement I felt when I read Zora Neale Hurston’s Their Eyes Were Watching God in high school. There were funny, dynamic black characters and they were in FLORIDA! Years later I would realize that getting a child to care about a book involves showing a child that books care about them: their identities, their histories, their futures. If you give a child one of those books, they will fall in love with reading and eventually give other books a try.

The Process: How do you work? Do you start with a character, a concept, an idea? Do you outline first or just go? Is there a technique or routine for drafting or revising that you find particularly helpful? Do you have an office or other location that works best for you?

As a writer, is it okay to say that I hear voices? Because I do. When I sit down to write, whether it is 4 a.m. sitting at my desk or in a noisy cafe, I begin with a voice. Most of my characters talk to me, telling me about their hopes, dreams, and fears. I usually listen to this voice for as long as possible, working with an outline but often departing from my original concept for the story. I have learned to let a character take me by the hand this way and guide me to where he/she/they want to go. This method of being guided along is how I would describe the drafting process of my stories. When it comes to revising stories, however, I have more of a handle on the plot and structure of the story. During the revision process, I also read my drafts out loud to get a feel for how the story sounds and to see whether my character’s conversations still seem realistic. I have found this technique helpful in honoring my character’s voice and in teaching myself how certain characters sound. When I read for children, they love the different voices that I use for each character. Little do my audiences and readers know that these voices are so funny and good because this is how the characters sound in my head!

“History gets a makeover in the new Choose Your Own Adventure Spies series, which plunks readers into exciting scenarios, based on real events, and lets them call the shots…This book will get kids excited about history, but it’s imperative that they read the end note on James Armistead Lafayette’s life to learn what choices he actually made.” –––Booklist

“In this history-inspired spin-off from the venerable Choose Your Own Adventure line, readers adopt the persona of James Armistead Lafayette, an enslaved person who becomes a spy during the American Revolution…The plots are swift and snappy, and the format, a tried-and-true gimmick that has persisted for decades, lends itself well to multiple rereads and interactivity, if not to a clear historical record.” –––Publishers Weekly
“…bringing the life of an enslaved person within reach for modern young readers is a feat. For fans of Choose Your Own Adventure books, this historical drama is worth having on the shelf.” –––Kirkus

What do we still need more of in books centering Black people and Black experiences?

You can continue to follow Kyandreia and her success through the sites below:

Thank you, Kyandreia Jones, for your contributions to children’s literature!