It’s beginning to look a lot like Christmas!  Around us we see decorations, holiday sales, and traditional holiday food and drink like egg nog and candy canes.  Turn on the radio and you can hear Donny Hathaway croon “This Christmas” as well as Michael Jackson and his brothers let us know that “Santa Claus is Coming to Town.”  It’s a magical, highly anticipated time of the year.  There are hundreds of cartoons and movies to commemorate the occasion from the iconic A Charlie Brown Christmas to the modern classic A Christmas Story and everything in between.  In recent years, I’ve become partial to The Proud Family’s Christmas/Kwanzaa episode and it is heartwarming in my adult years to see Fat Albert’s Christmas episode.

Last week I began thinking about traditional Christmas stories like the infamous T’was the Night Before Christmas that many of us have heard as a kid or read to a child as an adult.  But then I thought, what holidays stories are told for us, by us?  The Literary FUBU if you will.

Librarian and book collector Arthur Schomburg once said, “We need a collection or list of books written by our men and women.” So true, so very true.  Does the name Schomburg sound familiar?  It should.  As in the Arthur Schomburg Center for Research in Black Culture part of the New York Public Library in Harlem.

I present to you some of the books that I was able to find that revolve around the winter holidays of Christmas and Kwanzaa that either have been written or illustrated by a Black person.  Their names have been bolded below.  It is my hope that if you know of other holiday books that fit the criteria, you will share them with The Brown Bookshelf family so we can all add to our bookshelves and add to that list that Arthur Schomburg dreamed of many years ago.

A Child is Born by Margaret Wise Brown, illustrated by Floyd Cooper

An Angel Just Like Me by Mary Hoffman, illustrated by Cornelius Van Wright and Ying-Hwa Hu

Christmas Gif’: An Anthology of Christmas Poems, Songs, and Stories Written by and About African-Americans by Charlemae Hill Rollins and illustrated by Ashley Bryan

Hold Christmas in Your Heart: African American Songs, Poems and Stories for the Holidays by Cheryl Willis Hudson

K Is For Kwanzaa by Juwanda Ford, illustrated by Ken Wilson Max 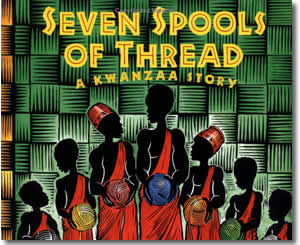 The Gifts of Kwanzaa by Synthia Saint James

The Most Precious Gift by Marty Crisp, illustrated by Floyd Cooper

6 thoughts on “Booked for the Holidays”