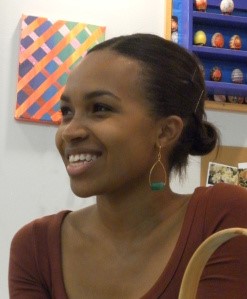 In 2012, we featured artist Elizabeth Zunon and her acclaimed second picture book, The Boy Who Harnessed the Wind by William Kamkwamba and Bryan Mealer. A Junior Library selection, that title won accolades and raves about her style. Since then, Liz has created many treasures including Don’t Call Me Gr 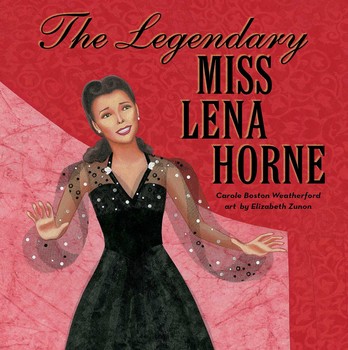 andma by Vaunda Micheaux Nelson and The Legendary Miss Lena Horne by Carole Boston Weatherford which debuted in January. You can learn more about her amazing work on her website and blog. Here’s our 2012 spotlight on Liz whose first authored picture book, Grandpa Cacao, will debut in 2019:

Elizabeth Zunon was born in Albany, NY and grew up in the Ivory Coast in West Africa (Cote d’Ivoire). Her artwork reflects the people, places, and things from the cultures of her childhood.

A graduate of the Rhode Island School of Design, Elizabeth has illustrated four picture books for children with several more on the horizon.

Today Zunon talks about her journey. And this is a treat!

Picture books have always been a feature throughout my life. I grew up in French-speaking Ivory Coast (Côte d’Ivoire) West Africa. Being a product of a bi-lingual family, my mother often read English-language bedtime stories to my little brother and me, and our bookshelves were filled with African, French, and American picture books. The excitement I felt (as a child and as an adult), finding a book in an American bookstore or library that I had been read or owned while living in Africa was (and still is)  exhilarating!

It was no surprise then, as I realized that making pictures could be something one could do for a living, that I decided to pursue children’s book illustration when I attended the Rhode Island School of Design. I toiled in my studio for hours on end, creating stories and projects that drew from memories of my childhood in the Ivory Coast. Obsessed with depicting scenes from home, trying to relay to my classmates and professors foreign and familiar ideas about the world which I grew up in.

After graduating from Rhode Island School of Design in 2006, I moved to Jersey City, NJ and started working in a flower kiosk in Bryant Park in New York. It was a green oasis in the middle of a busy, crowded, noisy city where people could take the time to sit, rest and contemplate. I had a lot of time alone in the flower kiosk among the potted orchids, hydrangeas and irises, to sit and contemplate myself. I filled up my sketchbook with drawings of people in the park, notes about clandestine conversations I overheard, and story ideas for potential books I could create. I met a lot of people and had many unexpected conversations with passers-by that I probably wouldn’t have just walking down the street.

The park was a great space for an artist’s mind to absorb sights, smells, sounds… and to generally be inspired.

During my time in New York City, I attended various Society of Children’s Book Writers and Illustrators (SCBWI) meetings and events where I met authors, illustrators, editors, publishers and agents. I spent my evenings after work researching publishing houses and their portfolio submissions, worked on my own painting projects on the weekends to add new pieces to my portfolio and did some portfolio drop-offs at various houses in New York (collecting rejection letters along the way). I met my agent, Lori Nowicki (Painted Words) during an illustrator-agent critique session at the Society of Illustrators. She offered to work with me and help me get “real” (paid!)  illustration jobs. Soon after she took me on, the contract for My Hands Sing the Blues: Romare Bearden’s Childhood Journey came along! It was my first illustration contract, and it was published in September 2010.

My favorite author/illustrator is Ezra Jack Keats. I loved the book The Snowy Day as a little girl; mostly because the idea of putting on a snowsuit and playing outside in mounds of snow was very exotic to me at the time, living in tropical Africa (I took the palm trees swaying in the hot sun for granted until I was a teenager living in upstate New York). The various textures and colors that Keats used in his books inspired my way of working when I graduated from design school. A seamless combination of printed paper, colored paper and painting is what I strive to create today. I love pattern. I’ve started experimenting recently with stamping and silkscreening – so much fun! And addictive!

Vera B. Williams is another one of my favorite author/illustrators. As a child, I saw aspects of myself in Bidemmi, the main character in her book Cherries and Cherry Pits: “… Bidemmi loves to draw… She always tries a new marker right away… The green, the pink, the red, the purple, the brown, the black, and all the others.” She was just like me! I love the carefree  marker and watercolor style of Williams’ illustrations. I also think that this book got my mind simmering on the idea of “drawing stories” and the importance of the reader identifying with a character.

In the last illustration for My Hands Sing the Blues: Romare Bearden’s Childhood Journey, I painted a little Bearden running across the page, leaving blue footprints in his own painting. This is a nod to my favorite Keats and Williams book characters. 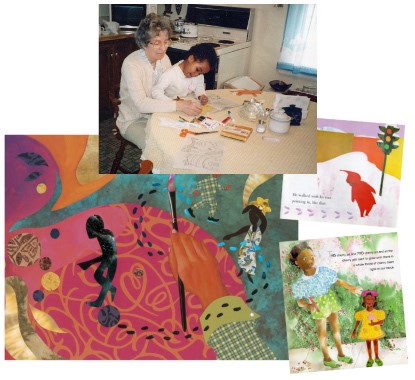 I also love the work of illustrator Kadir Nelson. The gracefulness and sumptuousness of  his oil painted portraits is unparallelled. There is a mature quality in his paintings that I think should be seen more in children’s books. Why shouldn’t books we buy for our children consist of exquisitely executed oil paintings? They deserve it! The symmetry and balance in his illustrations makes them seem majestic- and you just can’t stop staring! Nelson’s use of light, especially highlights on dark skin, make his figures glow, sing, live.

All of the books and stories I most identify with feature characters of different colors and origins. This reflects the world we live in, which I think is very important to represent to children.

Outside of the children’s book world, I would have to say that the lyrics of Bill Withers’ songs are a great inspiration to me. The beautiful simplicity with which he communicates feelings and describes imagery is something I look to often when thinking about writing my own stories.

I was lucky enough to be considered as the illustrator for The Boy Who Harnessed the Wind last year. The manuscript arrived on my desk just as I was finishing up the paintings for Lala Salama: A Tanzanian Lullaby. I felt very proud, as an African, to actually be illustrating a true-life story of innovation and ambition by another African. As the deadlines for his book were very tight, I immediately set to work researching the boy; William Kamkwamba, and his life. 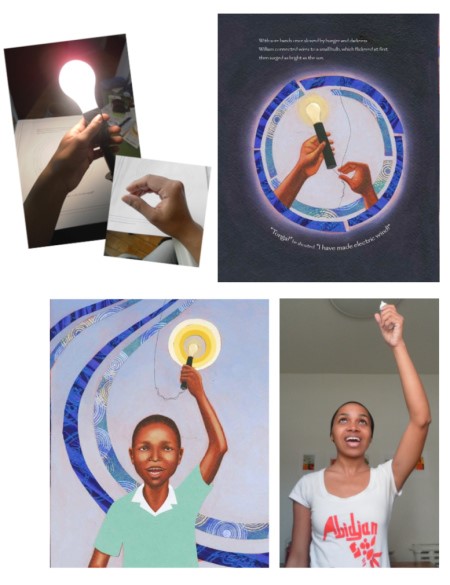 One of my favorite parts of exploring a new story is posing as the characters  and taking lots of reference photos that I will draw and paint from to create the final illustrations.

William collected odds and ends of metal, rubber, rope and such from his local scrapyard and from around his home to build a working windmill. This windmill changed wind into electricity, which William  then used to light his house and ultimately help irrigate his family’s fields during a horrible drought.

I wanted to emulate William’s process of searching and gathering, so I scrounged my house for odds and ends that I could use in the illustrations for his book.

Photos I took of bottle-caps, nails, screws and lightbulbs I found all made it into the illustrations, as well as lots of pieces of paper from my (always growing) collection. Gathering and putting all these different pieces together was a thrill!

The Buzz for The Boy Who Harnessed the Wind

The true story of a Malawian teenager who leveraged need and library research into a windmill constructed from found materials.

Forced by drought and famine to drop out of school, William dreams of “building things and taking them apart.” Inspired by science books in an American-built library near his village, his dreams turn to creating “electric wind.” Despite the doubts of others he begins—assembling discarded bicycle parts and other junk into a rickety tower, triumphantly powering an electric light and going on to dream of windmill-driven wells to water the land. Kamkwamba tells this version (another, for adult readers, was published with the same title in 2009) of his tale of inspiration meeting perspiration in terse, stately third person: “He closed his eyes and saw a windmill outside his home, pulling electricity from the breeze and bringing light to the dark valley.” Zunon illustrates it handsomely, with contrasting cut-paper-collage details arranged on brown figures, and broad, sere landscapes painted in visibly textured oils.

Zunon’s (My Hands Sing the Blues) oil paint and cut-paper collages amplify the entwined themes of science and magic in this adaptation of the authors’ 2009 adult book. Kamkwamba was born in Malawi in 1987, and when he was 14, drought was ravaging his country. Forced to leave school to save money, Kamkwamba studied science books at the library, learning about windmills—and their potential. “He closed his eyes and saw a windmill outside his home, pulling electricity from the breeze and bringing light to the dark valley.” Gathering materials from the junkyard, he assembles a windmill that creates “electric wind” and even lights a light bulb. Tradition and “tales of magic” combine with the promise of technology in this inspiring story of curiosity and ingenuity. Zunon’s artwork combines naturalistic and more whimsical elements; the African sun beats down on Zunon’s villagers, ribbony “ghost dancers” encircle Kamkwamba’s bed while he sleeps, and blue cut-paper swirls sweep toward the windmill. While the narrative simplifies Kamkwamba’s creative process, an afterword provides additional detail for readers who share his mechanical inclinations. Ages 6–8. Agent: ICM. Illustrator’s agent: Painted Words. (Jan.)

Based on the best seller of the same title, this picture-book biography chronicles Kamkwamba’s teen years in a Malawian village. As he tills the soil, his mind teems with a mix of mechanical questions and the magical stories relayed by his elders. When a drought destroys the crops, his education fund dries up as well. Kamkwamba seeks refuge in the American-built library, where, dictionary in hand, he decodes the function of a windmill that has captured his interest. Despite the murmurings of incredulous villagers, the young man assembles junkyard scraps to build “electric wind.” The third-person descriptions and dialogue are flavored with African phrases. Zunon’s compositions, rendered in cut paper and oils, create a variety of moods. Colorfully garbed ghost dancers populate the boy’s dreams, while crumpled tan rice paper, arranged to depict a high horizon line just beneath a blazing sun, forms a parched landscape, overwhelming in scale. Swirls of patterned blue and green paper portray the wind that propels the blades of his creation. While an extensive author’s note explains that it took several years to achieve the ability to irrigate, the lack of clear visuals to show how wind becomes electricity (and ultimately pumps water) may frustrate young children. That caveat aside, this is a dynamic portrait of a young person whose connection to the land, concern for his community, and drive to solve problems offer an inspiring model. It would pair well with one of the recent titles about Wangari Maathai.-Wendy Lukehart, Washington DC Public Library.