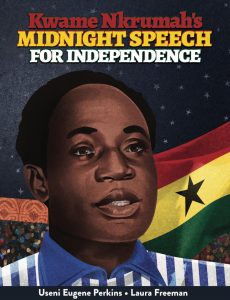 We are delighted to host the cover reveal for an amazing forthcoming picture book from Just Us Books. Written by Useni Eugene Perkins and illustrated by Laura Freeman, Kwame Nkrumah’s Midnight Speech for Independence “shares the story of Nkrumah’s declaration of Ghana’s independence and the tremendous history that led to that celebrated moment.”

Award-winning creators Perkins (Hey, Black Child) and Freeman (Hidden Figures) have given us something meaningful and magic. From the stirring storytelling to the stunning portraiture and Adinkra symbols and kente cloth woven into the art, you feel the pride of a country and the perseverance, unity, strength and vision needed to make it free. One of the most touching scenes shows the British Union Jack being lowered and the Ghanaian flag being raised – a new flag for a newly liberated nation: “At long last, the battle has ended. And thus Ghana, your beloved country, is free forever!”

We need more books that celebrate the history of Africa and center its heroes. The back matter includes an insightful author’s note, guide to Adinkra symbols and their meanings and detailed timeline.

Here’s more about this inspiring title from the publisher:

On a humid March night in 1957, Kwame Nkrumah made history. While thousands of people, including dignitaries from around the world cheered, he announced his country’s independence. After many decades of British rule, Ghana, formerly the Gold Coast, became the first sub-Saharan African nation to break free from colonial rule.

Please join us in spreading the word about this exciting new picture book that debuts in September. You can pre-order your copy here.