Joshunda Sanders dreamed of being a writer ever since she was a tween. Sitting on her fire escape, she came up with stories inspired by the world around her. Today, this educator and veteran journalist, helps kids find their own voice. Joshunda’s powerful picture book, I Can Write the World (illustrated by Charly Palmer, published by Six Foot Press), is the first in the Ava Murray Writes the World series. In the debut title, Ava, dismayed by negative images of the Bronx she sees in the media, creates a lyrical celebration to the place she calls home. Her second book, A Place of Our Own, will be published in October.

“I love writing about my hometown because it’s a place of great beauty and potential and culture,” Joshunda says on her website. “So much is alive and thriving here, and not just in the parts that people write about. But also I think writers really love writing about where they’re from because they know it best. I am a Bronx expert because I know this place best, and that makes it easy.”

We’re thrilled to salute Joshunda Sanders on Day 22 of our campaign.

Some books begin in response to a question that has never been posed to us before. That was the case for I Can Write the World. My agent, Charles Kim, asked if I had ever considered writing a children’s book. I was surprised that I had never thought about it before. It was harder than I expected to write for young people, considering that I think of myself as kind of a big kid especially when I’m outside of public view. I struggled to nail a younger perspective initially, but with the help of those who work with young people more closely, I was able to tackle a voice that is both wise beyond her years and still hopeful and optimistic about the future.

My book deal came about because of my relationship to Charles, who happens to also be a fellow Vassar alum who I met at a volunteer event a couple of years ago on campus. (We graduated in different years.) We stayed in touch after that event and when he asked about a book idea for a children’s book series, I thought about the one children’s book I wish I’d seen growing up. That brought together all the things I wanted young Black girls in particular to be encouraged to do – to see whatever their version of The Bronx is, no matter where it is, as not just a place of 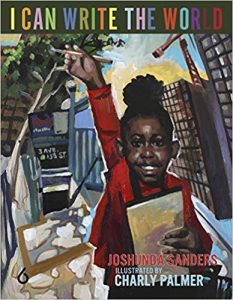 poverty and lack, but a rich reference point and springboard for them to contextualize their stories. I thought about the creative and makers, present and past, who embody this concept of bold and brave storytelling and I thought of Ava DuVernay, the brilliant filmmaker and civil rights icon the Rev. Dr. Pauli Murray. That’s how Ava Murray got her name. It was most rewarding to introduce others to some of the loveliness and rich history of The Bronx by way of the narrative but also through the beautiful, beautiful illustrations of Coretta Scott King-Award-winning illustrator and artist Charly Palmer.

I find inspiration everywhere, so I love this question, but I know that I will leave people out. I am an incredible fan of Jacqueline Woodson, of Lupita N’yongo, Renée Watson, Olugbemisola Rhuday-Perkovich, Vashti Harrison, Matthew A. Cherry. (So excited for his and Team Hair Love’s Oscar Win!) In the YA space, I love Elizabeth Acevedo – just how she moves in the world in addition to her beautiful work – my friends Torrey Maldonado and Morgan Parker, Jason Reynolds. I love actors, aside from Lupita, like Regina King, who do not allow genre or time or other people’s boxes to hem them in. It can sometimes feel like children’s book authors are confined to the perceptions others have about the ease of writing a children’s book – as if being a children’s book author is somehow less important than being a novelist or an author of another kind. I actually believe it is supremely important from a young age to show our young people that they exist, that they have agency in framing and shaping and telling their stories. It’s the foundation that I hope will carry them throughout their lives.

Books are a bit like our relationships to other people – each requires something unique of us. Or I guess I should speak for myself here and say that’s how it is for me. So sometimes a character presents themselves. Ava was like that. I don’t remember where this notion of asking a character what story she/they would like to tell came from – I’m pretty sure I’ve stolen that idea (or borrowed?) from someone else. But an idea or concept for me often develops after I’ve interviewed this character to determine what she/they most want to say. I very much view myself as a catalyst for stories, and I’m happy to be the one to transcribe them, but I recognize there’s nothing new under the sun. I did not outline I Can Write the World; the revision process for it happened more organically and quickly than I expected. That was all God! For the second book in the series, A Place of Our Own (Six Foot Press, 2020), which is out later this year, I did outline extensively, changing it a bit once I received notes and feedback on the early drafts. I prefer the latter approach – it frees up mental energy to have a kind of roadmap that allows for pivoting within the narrative when you need to.

One of the saddest side effects of social media, for all of its benefits for us in terms of loose ties and connectivity, is the way that both time and truth can be collapsed – or at least it feels like time and truth are collapsed, even though they’re not. So because Black women are heavy users of social media like Twitter and Facebook, we are always sharing and making visible our presence which can make it feel like we’ve made better strides in terms of centering Black people’s experiences in books, when obviously we haven’t. This is why you can have a Barnes & Noble fiasco with “diverse covers” in lieu of the amplification of books with Black people on the cover that already exist. Another reason is that diversity has become a buzzword almost completely devoid of real meaning, sadly. The point of having a multitude of American experiences reflected in books and literature is to ensure that we are not erased from the canon as more than political props, amalgamation of stereotypes or a long-suffering community whose highest aspiration is to no longer suffer. The books we still need to see more of are those of Black people as Americans living our lives with joy, in love, resting, relaxing, in our full glory. I believe joy is a revolution, and portraits of Black folks in repose may strike some as being boring, but knowing what we do about the legacy of slavery and servitude in this country, it is still, unfortunately, a revelation in 2020 for Black people to rest, to be easy, to keep our minds on our own business and to be completely committed to our liberation so that we can help free other people.

The Buzz on I Can Write the World

“A vibrant story about what makes a place home and the ties between culture and pride.”

“In a time when just 5.6% of newsroom employees are Black, and most of the stories (including children’s books) about Black people continue to be written by white writers, this book is needed and contains a powerful message.”

“I Can Write the World is a true gem and one you’ll definitely want to add to your bookshelves. Let’s make this a bestseller, shall we? . . . The illustrations by Charly Palmer are captivating and really help capture the true essence of the overall messages. The words will pierce your soul.”

Learn more about the inspiring work of Joshunda Sanders here.