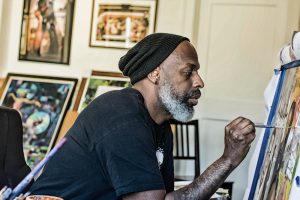 Love, family, and history are common themes in Charly Palmer’s vibrant works. With bold colors and broad brush strokes, Palmer explores what it means to be Black. Prior to entering the field of children’s publishing, this Atlanta based artist, graphic designer, and illustrator ran a successful design studio. Fortune 500 companies his clientele. In addition, Palmer has taught design, illustration, and painting at Spelman College. 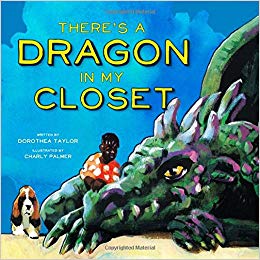 Palmer’s artwork is held in many public and private collections. He was commissioned for the 1996 Olympics and the Atlanta Convention and Visitors Bureau, in addition to creating artwork for Fisk

and Howard Universities. He completed a project with the Green Bay Packers, which features art for the Lambeau Stadium.

Born in Fayette, Alabama and raised in Milwaukee, Wisconsin, he attended the School of the Art Institute of Chicago and received a degree from the American Academy of Art.

Palmer made his debut in children’s books with “There’s A Dragon In My Closet” (Denene Millner Books), and “Mama Africa!: How Miriam Makeba Spread Hope with Her Song” (Farrar, Straus and Giroux). The latter garnered starred reviews from Kirkus and The Horn Book, in addition to earning a Coretta Scott King John Steptoe New Talent Award for Illustration.

As a child, Palmer was captivated by the illustrations in Ezra Jack Keats’ “The Snowy Day.” He became inspired by the random geometric shapes and layered textures of Keats’ work. That inspiration lead to Palmer’s development of his own unique art style—bold, expressive, textured.

On the horizon, be on the lookout for his illustrations in the upcoming book, “My Rainy Day Rocket Ship” (Denene Millner Books, 2020), which pairs a young African American boy with a rainy afternoon and a vivid imagination. The cover’s dreamy!