Skip to content
Today I’m very excited to feature Camryn Garrett, a young author who has been a part of the industry landscape for years. (I’ve been following her on twitter for a long time.) Her debut FULL DISCLOSURE was released in Fall 2019. It’s smart, funny, and features a main character we haven’t seen much of in YA, a sexual teen who happens to be HIV+.
Please join me in welcoming Camryn to the blog! 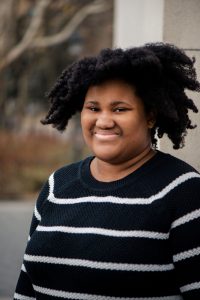 What was your journey to publication?
It was pretty long, but I think that’s the case for everyone. I started writing with the intent to get published when I was thirteen. I had my first agent when I was fifteen, and we went on submission with a book that didn’t sell. I signed with my second agent when I was sixteen or seventeen, if I’m remembering correctly. We worked on revising FULL DISCLOSURE together for several months before going out on submission with it; I’d been on submission before, so I was expecting a long wait, but it only take a day for my editor to come back with an offer. It was one of the best moments ever.
What is your back story?
I go through weird phases of obsession with different topics, like the science of IVF or the history of orphanages. A few years ago, I was really into international adoption, so I read a lot about Angelina Jolie. One of her kids was adopted from an orphanage where most of the kids were HIV positive. Her kid was the only one who didn’t have HIV.
I started wondering about how the adoption process for HIV positive children would be different, so I read a lot of adoption blogs written by parents who adopted positive children, watched documentaries on Netflix, and read articles online. I also had the help of my mom, who is a nurse, and is used to answering weird questions.
Eventually, I started wondering what it would be like to be a horny teenager with HIV. I wanted to create a really confident, young woman who knew exactly what she wanted, especially regarding sex. That’s where Simone, the main character in my book, came in. 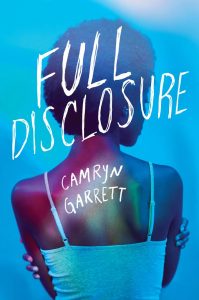 What kind of attention has your book been getting?
I was named one of Teen Vogue’s 21 Under 21 and a Glamour College Woman of the Year. My book got a starred review from School Library Journal, was featured  and was called “the YA novel of the year that everyone should be talking about” by Shondaland, and Entertainment Weekly said, “But perhaps the most remarkable thing Garrett achieves with Full Disclosure is the compassionate portrayal of people who are usually rendered invisible not only in Y.A but in life. And she manages to write a hell of a novel while doing it.” It was also featured as one of Jasmine Guillory’s best books of 2019 on the Today Show!
What is your opinion on the state of the industry especially as pertains to Black children’s book creators?

I think a lot of progress has been made in a short amount of time; I started writing when I was thirteen (in 2013) and the children’s book landscape was completely different, at least in my opinion. I’ve grown really used to being able to find Black writers telling stories that I don’t have to search too hard for, which seemed really rare a few years ago. It’s even cooler to see queer Black writers telling stories about queer Black kids — I just read Leah Johnson’s YOU SHOULD SEE ME IN A CROWN and wished so strongly that I’d had it at fifteen.  And now that I’ve branched out into reading middle grade, I feel that all the time; wishing I’d had these books when I was growing up. I love it.
My main worries are the question of whose books get a huge push and whose don’t. I think white writers, or even non-Black people of color, will get huge pushes for books that have anti-Black content. Usually, you see Black people talking about it online, but it gets steamrolled over or we’re said to be kicking up a big fuss over nothing. One thing I’ve learned is not to say that there aren’t stories; I wouldn’t say that Black queer men aren’t writing or that Black disabled people aren’t writing, but their stories don’t get the same attention as others. And it can be upsetting to see a white writer writing Black characters and getting more attention than us.
I’m not quite sure how to fix it. But I’m really glad that we support each other.
Thank you Camryn! You can find her online on Twitter @dancingofpens, on Instagram @tomboy2020 and on her website: https://www.camryngarrett.com/.