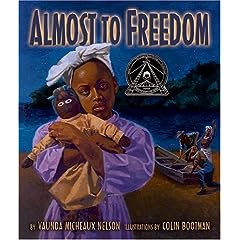 Children’s librarian and author Vaunda Micheaux Nelson was exploring an exhibit of historic rag dolls at New Mexico’s International Museum of Folk Art when inspiration struck. As she perused the collection, which included a few dolls from Underground Railroad hideouts, she is quoted as thinking: “If only these dolls could talk.”

So began Nelson’s journey to use a doll to give voice to the harsh realities of slavery. Her award-winning picture book, Almost to Freedom, beautifully illustrated by Colin Bootman (Carolrhoda, 2003), does this in a powerful way.

Sally, the doll of enslaved child Lindy, witnesses the hardships of the time — picking cotton in oppressive heat, feeling the pain of the lash, bearing the searing ache of loved ones being sold away. When Lindy and her mom escape for freedom along the Underground Railroad, Sally comes with them.  One night, the family — reunited with Lindy’s father — has to flee a safe house to escape slave catchers and Sally is accidentally left behind. The doll, lonely at first, brings the story full circle as she becomes the fabric of hope for another child.

The Buzz on Almost to Freedom:

“A compelling story told from the point of view of an enslaved child’s beloved rag doll. Made for young Lindy by her mama, Miz Rachel, the hand-stitched toy is the girl’s most prized possession. She tells her, “Your name be Sally. We gonna be best friends.” When the child’s father is sold and Lindy is beaten for asking Massa’s son how to spell her name, the horrid conditions of the cotton plantation become intolerable. One night Miz Rachel wakes Lindy and they run for their lives. They are reunited with Mr. Henry and the fugitive family heads North to freedom. They are given shelter at a station on the Underground Railroad, but must flee from slave catchers in the middle of the night. In the frantic scramble, Sally is left behind. The doll is lonely for her friend and worries for the safety of Lindy and her folks. When another child and her mother are sheltered in the basement, the doll joins her new best friend on her trip to Freedom. This accessible story is told in language that is within the experience of a young child and makes its impact without frightening or overwhelming readers. It is ultimately a story of hope and resilience, love and friendship. The evocative oil paintings are expertly rendered and effectively convey the powerful emotions of the tale. A fine addition to most collections.”

“Lindy’s beloved rag doll, Sally, tells how Lindy’s family escapes on the Underground Railroad to find freedom “in a place called North.” The doll’s narrative and Bootman’s dark, dramatic paintings bring close the child’s daily experience: the cruel separation and physical punishment, and then the adventure of running away and hiding. At times it’s hard to distinguish Sally from Lindy–why not just let the child tell the story herself? But then there’s an anguished twist in the plot: the child and her doll are separated. Lindy gets away, but in the turmoil she leaves her doll behind. When another escaping child finds Sally and hugs her to herself, the story comes full circle. That’s a powerful way to express the sorrow of loving families torn apart, and Bootman’s stirring portraits, many of them set at night, in rich shades of purple and brown, show that the small rag doll bears witness to historical events of cruelty and courage.”

One thought on “28 & Beyond: Almost to Freedom”