Mother’s Day is around the corner. It’s a great time to share picture books by Black children’s book creators that celebrate moms, grandmas, mother figures and family bonds. Here’s a list to get you started. Click each cover to learn more. Please share your favorite books saluting moms in the comments.

The Buzz on Mommy’s Khimar:

“The vibrancy and charm of Glenn’s art is embracing, allowing readers of all cultures and faiths to appreciate the narrator’s joy and celebrate with her. Readers of all backgrounds can easily identify with the imaginative, young narrator…The delightful prose and whimsical illustrations reflect a culture of diversity and acceptance while offering many entry points for discussion with young audiences. Warm and sweet, Mommy’s Khimar is an uplifting and invigorating tale for any story time.”

The Buzz on Tiara’s Hat Parade:
“ . . . Lyons does a fantastic job of fashioning a strong bond between Tiara and both her parents in this work. The language is inviting and warm, and the characters reminiscent of people you might know from your neighborhood or family. Tadgell’s joyous, expressive watercolors bestow a fun and light-hearted quality to the story and bring Tiara’s world realistically to life. A welcome addition to any children’s book collection.”
— Booklist
Brown Baby Lullaby (Farrar, Straus and Giroux) written by Tameka Fryer Brown, illustrated by A.G. Ford 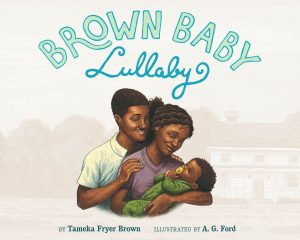 The Buzz on Brown Baby Lullaby:
“A young black couple plays with their baby on a blanket on a large expanse of grass in front of a white, two-story home. The sun sets and they go inside, where rhyming verses bring the family through playtime with pots to a messy spaghetti dinner in the high chair, followed by a bath, kisses, dancing to Coltrane, a story, and a tuck-in. Spanish words are organically sprinkled throughout the English text—“Look, mi hijo,” and “Vamos, fussy baby”—making this one of few picture books to represent Afro-Latinx families . . . A perfect read-aloud for bedtime.”
— Kirkus, Starred Review
Grandma’s Purse (Knopf) written and illustrated by Vanessa Brantley Newton 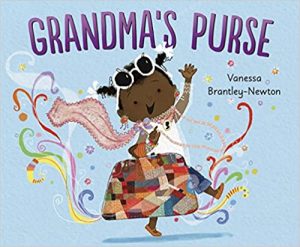 The Buzz on Grandma’s Purse:
“Brantley-Newton creates a whimsical interplay of patterns, rich color, and her trademark lively expressions–a beautiful visual mélange. The magic of grandparents is undeniable, and this book is an excellent treat for grandkids to share with their own grandmas and grandpas, or the other way around.”
— Kirkus
Saturday (Little, Brown) written and illustrated by Oge Mora 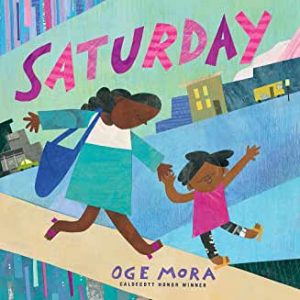 The Buzz on Saturday:
“The simple yet heartfelt story tugs at the emotions, but it’s the paper collage artwork that really packs a punch. Created with acrylic paints, china markers, patterned paper, and print clippings, the bright illustrations are inventively conceived and full of motion-just the right vehicle for bringing this Black mother-daughter duo to vibrant life.”
— Booklist, Starred Review
Just Like a Mama (Denene Millner Books/Simon & Schuster) by Alice Faye Duncan, illustrated by Charnelle Pinkney Barlow
The Buzz on Just Like a Mama: 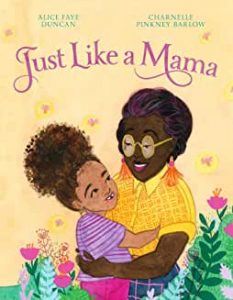 “Because Carol Oliva Clementine cannot live with Mommy and Daddy, the child lives with Mama Rose . . . A beautiful story of love and kinship, so needed for the many children living apart from their nuclear families.”
— Kirkus 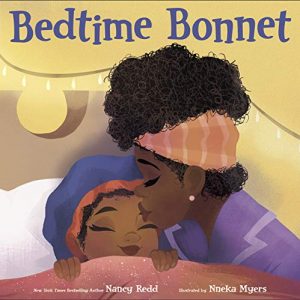 The Buzz on Bedtime Bonnet:
“A celebration of black hair, family, and culture . . . This brightly hued picture book with loads of charm will entertain and empower readers.”
— Kirkus 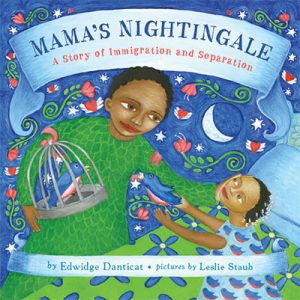 The Buzz on Mama’s Nightingale:
“A tale of triumph that occurs only because a young girl picks up her pencil and writes to people who can help make change. Saya, a child of Haitian descent, and her father live together in the United States without Mama because the immigration police arrested her one night at work . . . A must-read both for children who live this life of forced separation and those who don’t.”
— Kirkus, Starred Review
Grandma’s Records (Bloomsbury) written and illustrated by Eric Velasquez 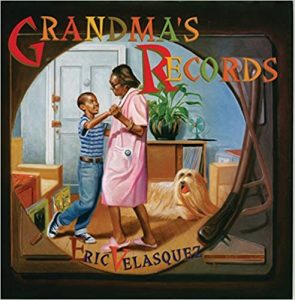 The Buzz on Grandma’s Records:

“Velasquez proves himself adept at evoking time and place as well as a loving family bond. The narrator spends his boyhood summers at his grandmother’s apartment in Spanish Harlem, where Grandma introduces him to the sounds of merengue and conga, dances with him and tells stories of growing up in Puerto Rico.”

The Buzz on Pecan Pie Baby:
“Mama is pregnant with what soon-to-be sibling Gia refers to as “the ding-dang baby.” Among the indignities she suffers: the in utero baby is already copying Gia’s love of pecan pie—a culinary obsession that Gia thought she could share with Mama alone . . . Gia may have moments when she feels “real, real, real alone,” but readers will sense that Mama’s love endures—and that Gia is going to be a very cool older sister. ”
— Publishers Weekly 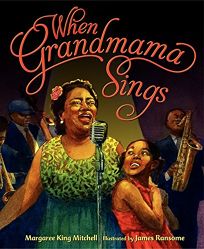 The Buzz on When Grandmama Sings:
“Mitchell and Ransome, the team behind Coretta Scott King Honor–winner Uncle Jed’s Barbershop, reunite for another story set in the early 20th century, in which intimate family relationships are set against a backdrop of racial segregation . . . Ransome’s lovely, naturalistic watercolors draw out a wealth of emotions from the characters, particularly Grandmama, whose expressions range from weariness to passion while she’s singing, and determination, such as when she slams money on the counter of a restaurant that won’t serve them. It’s a stirring reminder that it’s never too late to chase one’s dreams, no matter the obstacles.”

Jonathan and His Mommy (Little, Brown) by Irene Smalls, illustrated by Michael Hays

The Buzz on Jonathan and His Mommy:
“A playful story about a small African-American and his mother taking a long walk through their city neighborhood and making a game of using different steps—giant steps, baby steps, bunny hops, ballet twirls, backward steps. A rhythmic, repetitive text with some rhymes and sun-washed illustrations—a happy summer book.”
— Kirkus 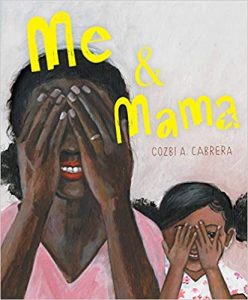 Me and Mama (Denene Millner Books/Simon & Schuster) written and illustrated by Cozbi A. Cabrera
Description from the publisher:
“Mama’s love is brighter than the sun, even on the rainiest of days. In the tradition of Someday, this celebration of a mother-daughter relationship is perfect for sharing with little ones!”