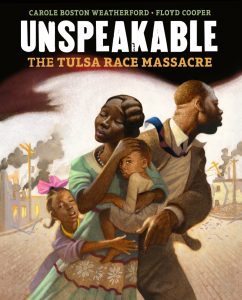 The Tulsa Race Massacre. Maybe you learned about it on the series opener of Watchmen or read about it over the years. But did you learn it in school?

Award-winners Carole Boston Weatherford and Floyd Cooper want to change that and make sure this horrific act of terror is not forgotten. In 1921, white mobs launched an assault by ground and air, razing Tulsa’s Greenwood neighborhood known as Black Wall Street filled with businesses and homes. Historians believe hundreds died and were injured. The trauma and devastating loss has haunted generations.

The attack was sparked by an accusation that a Black young man raped a white young woman, and a stand-off at the courthouse. Some believe he accidentally stepped on her foot in the elevator and she screamed. He was never prosecuted.

We’re honored to host the cover reveal for a powerful book that will move readers of all ages. It debuts February 2 and is available for pre-order now.

Here Floyd Cooper talks about his deeply personal connection to Unspeakable and the memory that lives on.

The creation of this book started in 2018, but my connection to the story goes back to my childhood in Tulsa and visits to my grandpa in Muscogee. My grandpa loved to talk. When family came to visit, he talked. When a neighbor dropped by, right there on the front steps he’d go on for hours about history, current events, news, and politics. We kids thought this was soooo boring! But we hung around because we loved to hear Grandpa’s voice, and every now and then we’d learn a few things.

In those days, not many people talked about what had happened back in 1921. But one night Grandpa talked about Greenwood. With us. He had grown up there, and he told us how he was home that night when folks from south of the Frisco tracks came into Greenwood. He said, “everyone was caught off guard, like sitting ducks” when the looting, shooting, and fires burned Greenwood Avenue–the famous Black Wall Street–to the ground.

Everything I knew about this tragedy came from Grandpa; not a single teacher at school ever spoke of it. For a long time, we knew it as the Tulsa Race Riot, but some people have said the word “riot” was just a way to further injure the Black community. Insurance companies didn’t have to pay for damage to homes and businesses caused by a riot, so this meant Black folks had to find other ways to pay to rebuild what they’d lost. More recently, people have started calling it the Tulsa Race Massacre. A massacre is the violent killing of a number of usually helpless or unresisting people. By any name, it’s an event that’s deeply personal for me.

Now, the same way my grandpa told the story to us, I share it here with you. My grandpa passed away many years ago, but I hope that my art and Carole Boston Weatherford’s words can speak for Grandpa.