The Brown Bookshelf believes in promoting the work of Black children’s book creators year-round. At the same time, we shine a special spotlight on select authors and illustrators during the month of February, in honor of the traditional Black History Month observance inspired by the efforts of historian Carter G. Woodson, who strove to illuminate the vast history and myriad contributions of African Americans at a time when society was particularly resistant to such. We’re well into our celebration, so enjoy meeting Nathan Bryon!

I first became aware of Nathan Bryon’s work because of his picture book with Dapo Adeola. The first was LOOK UP! and the next, CLEAN UP! both featuring a Caribbean girl with strong ideas. (No surprise that I found her really familiar.) I’ve bought the books for littles I love, and any kid with a distracted older sibling will totally feel Rocket’s frustration. Nathan’s post follows, but fair warning, it’s PG-13. I didn’t want to edit any of that out because it’s his authentic voice, and I love it. 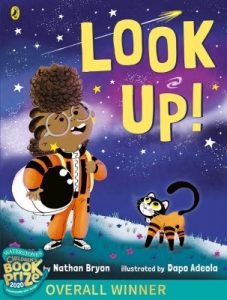 Tracey: Okay, Nathan, what made you want to start writing?

Nathan: I remember the first thing I ever had to write was some coursework in like GCSE drama, like maybe we had to write a poem. At first I was like rolling my eyes, like why the hell do I have to write anything, but that night I went home trying to write a poem I think just summing up maybe how I was feeling at the time or something. And I just put the pen to paper and it kinda just started flowing, and it wasn’t as hard as I thought. I am super dyslexic so I was already dreading it, but was really pleasantly surprised how much I enjoyed writing that little piece.

At the time I was part of a youth theatre so I just started joining loads of writing workshops, I did a poetry one which I loved, with two incredible writers, Dean Atta and Deanne Rodger and that really got me writing weekly and I even started performing it. Then I did a play-writing workshop which was amazing as that was were I learnt about writing dialogue which I LOVE and is my favourite thing about writing. I really struggle with structure and all that shit. After those two workshops, I never stopped writing weather it was tv scripts, books, plays, sketches, poems, radio, movies I have always been writing and always loving it, even when it is super tough I love the challenge it has on my brain. I also think being a writer helps you understand humans better as you have to think super deep about what makes your character a 3d person.

Tracey: What was your path to becoming published?

Nathan: My journey to being a published author was a joy, and I was super blessed, I never planned to be an author, or thought I was ever going to become one, again dyslexia from the jump tells you not to think like that especially as I find reading hard, so the honest truth was… I had an idea for a short story, I pitched it to an animation company, they said no… My agent at the time said this should be a book and introduced me to my amazing literary agent Sallyanne, I said well I don’t write books so I ignored that information for a while, Sallyanne politely chased me, I was broke as a joke and then I had a tax bill come through that was HUGE and I was like… boy I better learn how to write books hahah.

Once I set out on the journey to learn how to write a picture books, I was just reading all the picture books I could buy from Waterstones. Early on I spoke to Dapo Adeola the incredible illustrator about the idea and he was along for every step of the process, discussing the story, creating the visuals for the characters and we brought the book to life together. Dapo and I had known each other like for a good 7 years before we both got signed together so it was lovely creating with someone that I had known prior as we learnt that isn’t often how the process works.

We both signed to the same literary agent and it was wild to be honest, I was filming a tv show in Spain and Sallyanne my agent asked me to come back to London for a few days as she had sent our story to some publishers and a quite a few wanted to meet us. Dapo and I went around London on a day or two and we met them all and by the end of the day we had multiple offers. In the end Penguin felt like the right team to join. I’m probably missing out bits and bobs, highs and lows in that, but honestly I feel very blessed that my publishing experience has been completely joyous, especially with my team at Penguin. 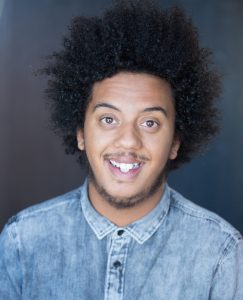 Tracey: That is 100% not the way things usually work, as you say, but another example of how there are as many paths to publishing as there are people in the industry. I’m dying about that tax bill though and how you thought writing would make you money. Okay, so who or what inspires you to keep going?

Nathan: Telling stories with Black protagonist inspires me. Whilst reading and seeing all the amazing talented authors and illustrators whose work I love, like Dapo, Like Malorie Blackman like yourself (Tracey Baptiste), Jessica love to name a tiny few.

What keeps me going is telling stories, which is the only thing I am good at so if this flops I am in troubleeeeee.

Tracey: It’s okay. Daps and I will look out for you. Tell us a little about how you work.

Nathan: I don’t know if I have found a exact way yet I work for all my projects as I work across lots of different mediums so they all require a different starting point but Sometimes the idea comes first and sometimes the character comes first, but whatever comes first I start with hahahah, what a bad answer.

Then I usually vomit everything in my brain down on large sheets of paper so if it’s a rough story, I will just write down everything about it, where is the story set, things it reminds me off, what I am trying to achieve with this story, is this story a metaphor, why do I care about this story, I think that is always important as you need to care about the story as you will probably be working on it for YEARS.

If it’s character I will fill that out the same vomiting everything down about the character, what do they look like? What is their take on the world? Most importantly what do they want? As that drives the story, I sometimes do an exercise I was taught by the incredible playwright Simon Stephens where you hot seat your character and you ask them 51 questions, those questions can be as random as you want and I feel that exercise often helps me learn things about the character that are more than surface deep, so what is their favourite meal? That might help me somewhere in the story.

Then I will probably leave the idea for a bit a week or two, as I get bored SO QUICK and have the attention span of a small fish, but then what I cheekily do is I often mention the idea to friends and family and I always pitch to my fiancé, something really rough. If it’s something they look like they love I run back to the idea or start just thinking about it constantly when I’m out walking, if I am not getting much reaction I either leave it, OR I run back to it even faster because I know how good it is I just need to work on it more to make it make more sense.

Then generally after I have done all the vomiting of the idea, pitching to mates to gauge a reaction, I will try and condense all that information into a one pager or two page document, that helps me streamline the idea/story and then I send it to my agents and I gauge their sort of feelings then I will re-draft that one/two page doc and make it super slick. Then I will start taking it out to either publishers/producers or whatever to try and get some young money cash money to write it.

I used to hate re-drafting I thought it was the longest thing ever, and I am NOT a perfectionist, I am cook 10 pies and just hope 5 are really delicious, sensational tasting and accept some are going to burn. The more I write the more I am trying to become a perfectionist but with writing it’s never finished and it is never perfect and I ain’t on this earth to come kill myself for perfection, I’m here to tell stories and have fun and have cute cocktails with the money I make.

Then it’s just important to note when I get a deal I collaborate and I am open to other peoples’ ideas to make my idea better, so when I sell an idea I really open my heart to my collaborators.

Tracey: Welp, that is a pretty good summary of how the “vomit” draft works. Which, if you haven’t heard the term before, is what a lot of people call the first draft where you just put any and everything down and don’t worry about cleaning it up because…well…vomit. Okay, so it’s bragging time. 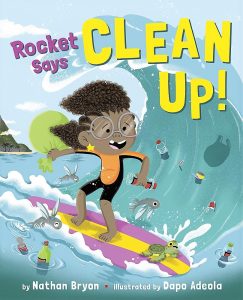 Dapo and I won the Waterstones Children’s book prize for LOOK UP in 2020 and our book was a Sunday Times best seller. We also got nominated for lots of other wonderful prizes.

Our books ROCKET SAYS LOOK UP and ROCKET SAYS CLEAN UP is also for sale in the states with Penguin Random House.

Dapo and I are working on another Rocket book in part of the UP series with Penguin and that should be out next year maybe… I’m not sure. But I really love the story so I am really excited to share that.

I have extended my deal with Penguin so I will be making 2 more books with them and hopefully many more.

My sitcom I have co-created with the hilarious Samson Kayo and written for Sky 1 and NOW TV called ‘BLOODS’ is out in March 2021.

I am in pre-production of my first feature film that I have co-written with a brilliant writer called Tom Melia which starts shooting in March.

Tracey: That all sounds really exciting. Way to keep your fingers in a bunch of pots! As he says, holla.