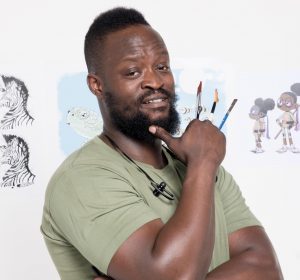 London born and bred but of Nigerian heritage, when he’s not busy cooking up new characters and adventures you can find him running illustration and character design workshops in and out of schools, to help highlight the possibilities of a career in illustration to inner-city children.

I’m a self taught illustrator in that while I studied Art in secondary school (High School for those in the states) and college and later Graphic design and advertising in university (both of which I failed btw), everything I know about illustrating has been learned outside of an education establishment. I’ve spent the last decade from 2009 to 2019 piecing together an education in illustration using various tutorials both printed and online, as well as any other affordable learning resources I could get my hands on in. Learning this way has been somewhat unconventional as I’m pretty sure it takes me a good deal longer to do things than it does my peers, but it has allowed me to become a more confident learner in that I’ve not had any of my knowledge handed to me, so being forced to seek it out means I’m 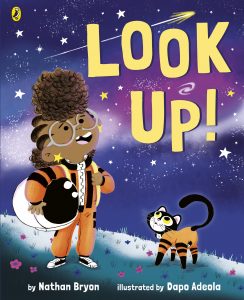 always trying to grow and learn.

During that decade I’ve gone from selling my work at art fairs to curating/putting on my own shows with other artists, to putting on my own solo shows to becoming a fully fledged children’s middle grade and picture book illustrator. To be perfectly honest I never actually intended to get into children’s book publishing so soon, ending up here was as much a surprise for me as my sudden and very unannounced appearance was for the rest of the UK children’s book industry.

It began with my friend Nathan Bryon (author of our debut picture book Look UP!) approaching me in 2015 with an idea and a very simple brief for a potential picture book character he wanted me to design. I accepted the task and went to town creating Rocket and the other characters in the world she inhabits. I was then introduced to my now agent (of 3yrs) Sallyanne via the literary arm of the talent agency that Nathan was already with as an actor/screen writer. She took our pitch (which only consisted of a story synopsis and a whole load of my concept sketches) to the Bologna children’s book fair in 2017 and then everything literally went bananas from there. By June that year we had amassed 14 offers from various well known publishers to publish our book and the bidding culminated in a back and forth bidding battle between Penguin and Bloomsbury which resulted in us going with Penguin and our book dropping to a steadily amazing reception in June 2019. It’s been nothing short of an awesome journey since.

This is very much an abridged version of my whole journey as it hasn’t always been smooth sailing, there were a lot of financial and lifestyle sacrifices involved in order for me to carve out the time to learn my craft and get myself to this stage. Coming from a certain generation of African parentage didn’t exactly help either as the arts isn’t seen as a lucrative career path in my home so I was and still am very much the black sheep of the family. But my stubbornness has paid off in ways I couldn’t imagine and I’m very much enjoying that I get to be a storyteller for a living.

The reception of this book has been nothing short of mind blowing. Black men, women and children have embraced it globally as has the industry and all the schools and libraries that help the industry function. So far we’ve been shortlisted for a Sainsbury’s award, Foyles Children’s book of the year award (we didn’t win these) as well as the much coveted Waterstones children’s book/book of the year award (fingers crossed we win this one) and I myself have been longlisted for the prestigious Klaus Flugge Prize for the most promising and exciting newcomer to children’s picture book illustration in 2020. We’ve also received starred reviews from publishers weekly and Kirkus as well as over 100 5star reviews on Amazon and a few hundred highly positive reviews on GoodReads as well. All of this has been amazing but the reviews we’ve received from the black community in the form of videos and social media posts has been the most heart warming by far. As well as book two dropping this July 2020, we’ve also been optioned and are currently developing an animated series for 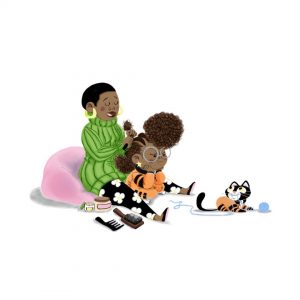 tv which will hopefully air in the next couple of years or so. There are a few adventures to be had with Rocket yet.

State of the industry:

The buzz around our book is only closely matched by the buzz that surrounded my appearance in the industry. So much so that a whole lot of people don’t believe that I’m very new to the industry and only have 1 book out in the UK, my 1st book (The Last Last Day Of Summer written by Lamar Giles) is an American publication. I’ve since come to realise that a significant part of this hype was because I am one of (possibly) 3 Black British illustrators currently working in UK Publishing, which is actually awful when you think of how big the industry is and how many illustrators work within it. This became doubly apparent when I was flooded with offers and book deals shortly after signing my 1st book deal. It was as if the industry had found one diverse talent and now instead of looking for others, everyone wanted a piece of this Black man. This was very lazy and lowkey exploitative tbh. Don’t get me wrong, I am talented, but I’m completely honest with myself when it comes to the fact that for a lot of children’s publishers I represent a massive tick in their diverse talent roster box. I wasn’t cool with that.

From the moment I found out this fact I’ve been working tirelessly to not only raise awareness around it, but to also find and offer help to other aspiring Black British illustrators who want to get into the industry. I’ve worked very closely on events and campaigns that aim to change the landscape within children’s publishing with Book Trust, the CLPE and one of my publishers Macmillan. I held the first Black British illustrators meet up back in May 2019 at Macmillan’s head office, where the publishing house opened its doors and shared its knowledge, critique and advice with a room full of artists who all wanted access to the industry. The turnout was brilliant and not only did it lead to the formation of a group (Black British illustrators network) where I share opportunities, resources and create access for its occupants, I’ve also held open evening type events with a couple of smaller publishers for small numbers of group members to enable them to get a behind the scenes look at how the books are made from acquisitions to publication. There are still a huge number of problems with the stories being told about black children within children’s books as well as who gets the opportunity to tell these stories, and while there are quite a few things happening now to change the landscape, it’s massively important that those of us who do get the chance to represent Black children in our work on the page also do our 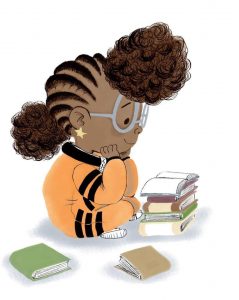 bit to encourage change in the industry off the page as well. There’s only so much I can do at the moment as I’m new to it all so I thought I’d start by tackling the lack of visible talent problem and then as I gain more ground I can help change the narrative on the page as well through my work by telling stories that show the vast range of experiences within the Black diaspora.