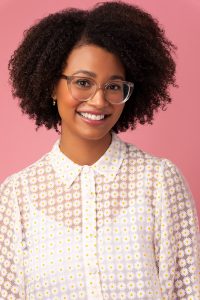 Elise Bryant was born and raised in Southern California. For many years, Elise had the joy of working as a special education teacher, and now she spends her days writing swoony love stories and eating dessert. She lives with her husband and two daughters in Long Beach. We are thrilled to welcome her to The Brown Bookshelf!

I started writing at a very young age. I wrote fairy tales at eight, moved on to boy band fan fiction at twelve, and started writing romance as a teenager. The through line for all of these stories was a girl that looked just like me at the center. It was so hard to find the joyful, funny stories I liked to read – starring Black girls, instead of only including them as the sidekick – so I wrote those stories myself. But somewhere along the way, I absorbed the idea that these stories weren’t important, weren’t real literature. So, I stopped writing all together by the time I was seventeen.

Flash forward over a decade later, I was a teacher in South LA trying to find books for my classroom. I taught English and reading classes for high school students with disabilities, and I was desperate to find books that my students (all Black or Latinx) would actually want to read. Just like me as a young reader, they asked for joyful, funny books. They wanted stories that would make them feel happy, stories they could see themselves in. And while looking for these books for them, I was introduced to a whole ‘nother world of young adult novels, so different than what existed when I was a teen. I found parts of myself in so many new characters: Madeline from Everything, Everything, Zuri from Pride, Suzette from Little & Lion, and Morgan from Who Put This Song On? And it all made me wonder: maybe the stories I was trying to tell as a teen, the ones that starred a girl like me, had some value after all. Maybe I could give it another try.

So, I started writing a book – on nights and weekends and lunch breaks. The main character was awkward and anxious and messy – just like I was as a teenager. But she’s given the space to make mistakes and learn, and she’s loved just as she is. And that novel became my debut, Happily Ever Afters.  I finished writing it in December 2018, signed with my agent in March 2019, sold it to Balzer + Bray/HarperCollins in April 2019, and it was published in January 2021. One True Loves, its follow up, was just published in January 2022. Now I hear from teens all the time that Tessa and Lenore are the first characters they saw themselves in, and I’m so grateful and humbled that I get to write these love stories centering Black girls for my readers. 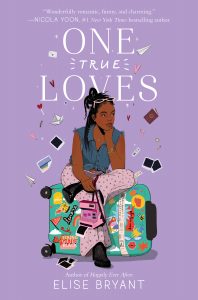 Happily Ever Afters was an Indie Next Pick, received three starred reviews and was nominated for an NAACP Image Award.

One True Loves was also an Indie Next Pick. Here are some of the early reviews:

“One True Loves is not only wonderfully romantic, funny and charming—it has genuine depth. I loved watching Lenore learn to open herself up to love and to the wider world around her.”
–Nicola Yoon, #1 New York Times bestselling author

“I love this book! One True Loves is laugh-out-loud funny, and every character is so tenderly drawn. Elise Bryant manages something quietly revolutionary in giving us Black love and Black joy on a European cruise, while also deftly and thoughtfully examining the burdens of representation and the beauty of the Black family.”
–Christina Hammonds Reed, New York Times bestselling author of The Black Kids

“One True Loves is a fantastic tale full of shenanigans, escapades, and lighthearted banter, while also delving into deeper issues of race and the perception of the successful futures of young people of color.”
–NPR

“In this companion novel to Happily Ever Afters, Bryant maintains her contemporary yet timeless authorial style that is a breath of fresh air for the genre. The dynamic characters and relationships and authentic tone make for an engaging read. Charm and humor balance the portions of the novel that delve into more serious topics like race, the pressures of familial and societal expectations, and mental health. A sweet love story for the realistic romantics of the world.”
–Kirkus Reviews

Thank you for all that you do to celebrate Black love and joy, Elise! Readers, you can visit with Elise anytime online, request her books at your local library, and purchase ONE TRUE LOVES wherever books are sold.

One thought on “Day 3: Elise Bryant”