Question: Who is Lisa Stringfellow?

Learn more about Lisa and her highly-anticipated middle grade novel, A Comb of Wishes (that publishes in just three days), below!

I am a veteran middle school English teacher and about 15 years ago, I returned to graduate school to work on my masters degree. I took several classes on adolescent literature and writing, and those courses got me thinking about writing for children.

At the same time, I was granted a teaching award that gave me funds to use however I chose. I joined professional writing organizations and a critique group, attended conferences, bought craft books, took classes and worked hard to learn about the publishing industry and how to write a book. It was all necessary work to help me gain the knowledge and skills to get where I am now.

The Back Story on A Comb of Wishes 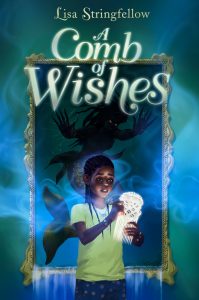 In 2013, I started a novel about a girl who found a mysterious box that belonged to a mermaid. I wrote alongside my students for National Novel Writing Month, also known as NaNoWriMo. Although my students participated in the Young Writers Program that allowed them to set flexible word count goals, adults like me took on the challenge of trying to write a 50,000 word novel in 30 days.

Even though I “won” NaNoWriMo that year, I didn’t finish the story until the following spring of 2014. I continued to work on revisions for two more years with the help of critique groups and wonderful mentors I gained through Author Mentor Match and Writing in the Margins.

After revising my manuscript, I wisely waited to query until I felt the novel was the best I could make it. That paid off because when I began to query in January 2018, I only sent out thirteen letters. I received agent interest right away and received an offer of representation from my agent Lindsay Auld of Writers House in March 2018. We continued to revise the novel together for another year and a half until we felt it was ready to go on submission. Once on sub, the novel quickly moved to a five-house auction and was acquired by Rosemary Brosnan at HarperCollins/Quill Tree Books in December of 2019. It will be published on February 8, 2022.

When I write, I usually start with a concept or premise. For example, in A Comb of Wishes, I wanted to write a story about a Black mermaid and a girl who found her comb and was granted a wish. I also knew that I wanted the story to be a little scary (being a fan of authors like Mary Downing Hahn and books like Coraline).

When I thought about what the girl would wish for, I struggled at first to think of something truly weighty and important. As Kela’s character became clearer, and the fact that she was grieving the loss of her mother, the pieces of the story began to develop. When I eventually got to the heart of the story in revision, it was much more than a story about a girl and a mermaid. It became a story about love, loss, the things we leave behind, and the things we carry forward. It’s about forgiveness and redemption for both the girl and the mermaid.

Representation was important to me as I wrote A Comb of Wishes. Kela lives in St. Rita, which is an island in the Caribbean that is inspired by Barbados where my father was born. I wanted the story to be rooted in the sounds, sights, smells, and tastes of the islands. In my writing, I often use sensory details to get close to my character’s emotions. Sights, sounds, tastes, smells, all help the reader to feel what is real and important at the moment. When I was writing, I centered Kela’s experiences. Everything around her was normal and part of her everyday life. I didn’t want to write through the gaze of an outsider, but as someone who lives and breathes the culture and setting.

I did research about many things in crafting the novel, but when I decided that oral storytelling would be a significant element of the story, I researched storytellers and storytelling traditions in the Caribbean. That was when I first learned of the call and response frame “Crick, Crack,” (sometimes written as “Krik Krak”) which is common on islands like Haiti, Grenada, and others. It reminded me of other interactive aspects of Black culture, such as that between a minister and congregation in a church. In communities around the world, oral traditions keep histories alive and create shared experiences through the interplay between the teller, the tale, and the audience.

What do we still need more of in books centering Black people and Black experiences?

I hope publishers consider a wide variety of storytelling styles and voices. When a topic or trope has been written about by others, it doesn’t mean it cannot be reclaimed by BIPOC and other marginalized storytellers, those of us whose voices have not yet had a chance to be heard. Kids need and want these types of stories.

I would also love to see more Black girls in middle grade fantasy. When I was a child, most books about characters that looked like me were contemporary or historical fiction, but the books I loved to read were fantasy. Absence sends as powerful a message as presence. Not seeing yourself in books, especially as a protagonist who is off having amazing adventures, can make a child feel that those types of stories are not for them. They absolutely are! Now, there is so much more representation, but I still think Black girls have room to grow and shine in the genre.

The Buzz on A Comb of Wishes

A Comb of Wishes is an ABA Indies Introduce Winter/Spring 2022 featured selection. It received a starred review in BookPage and praise from Kirkus, Booklist, School Library Journal and other trade review publications. The manuscript for A Comb of Wishes was awarded the inaugural Kweli Color of Children’s Literature Manuscript Award in 2019.

“Stringfellow expertly balances the story’s dual settings, evoking Kela’s all-too-human sadness on land and the impact of her mother’s loss on her whole family, as well as Ophidia’s underwater world, where magical sea creatures dwell and wishes can come true, if the wisher is willing to pay the price.” – BookPage

“A unique blend of Caribbean folklore and realistic grief with a vindictive mermaid twist. Hand to fans of mermaid tales, general fantasy lovers, and readers ­seeking a rare gem in the genre.” –School Library Journal

“Stringfellow’s middle-grade debut is a wondrous and original story that incorporates Caribbean culture and folklore. Told in alternating points of views between Kela and Ophidia, the novel leads us through a story about family that spans hundreds of years and will captivate readers until the end.” –Booklist 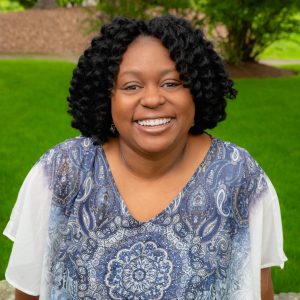 Lisa Stringfellow writes middle grade fiction and has a not-so-secret fondness for fantasy with a dark twist. Her debut fantasy A Comb of Wishes will be published on February 8, 2022 by HarperCollins/Quill Tree Books. Her work often reflects her West Indian and Black southern heritage. Lisa is a middle school teacher and lives in Boston, Massachusetts with her children and two bossy cats. To learn more about Lisa, visit her website at lisastringfellow.com and follow her on Twitter @EngageReaders.