I first became aware of the Pumphrey brothers last fall, when they presented at the virtual Texas Book Festival, where I also appeared. I was already familiar with their new book, THE OLD TRUCK , which had been collecting starred reviews by the, um, truckload, since it published last summer. I had no idea, however, that they were African American and that they lived near Austin until I watched their brilliant presentation. Wait, what?—besides myself, I didn’t know of any other African American children’s book author-illustrators in Austin. I was absolutely thrilled, and I looked forward to meeting them. Covid-19, of course, prevented that from happening. No pandemic, however, can stop me from highlighting their work. I’m pleased to let the creators of THE OLD TRUCK and the forthcoming THE OLD BOAT, Jerome Pumphrey and Jarrett Pumphrey, take over the blog today!

Jarrett: We’ve been making stuff together since we were kids. By the time we were teenagers, we’d written and illustrated dozens of stories. Most of them were about a superhero named Wonder Willis. He had 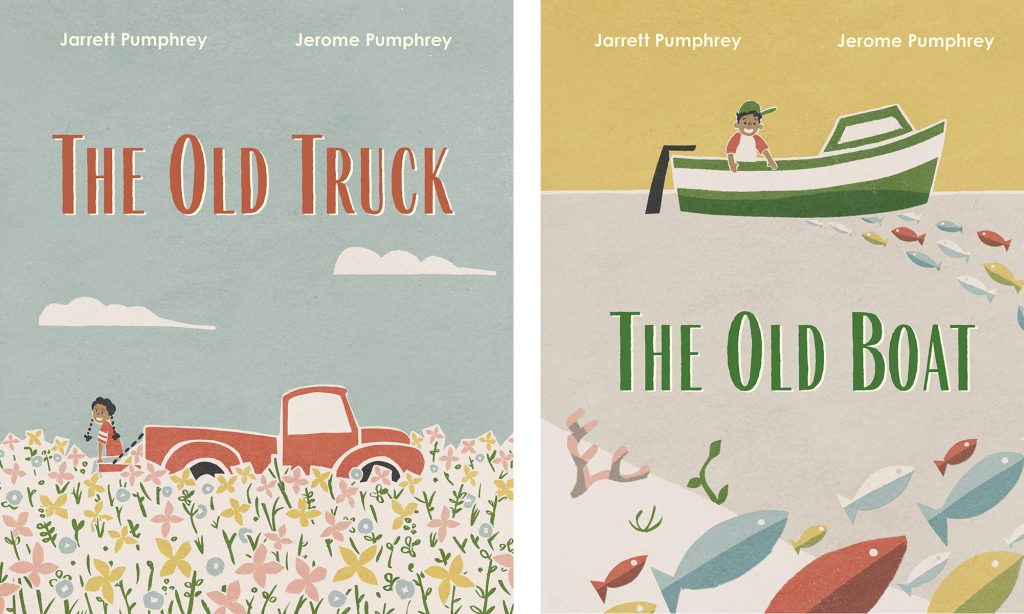 a flat top and wore lots of purple and gold. Somewhere along the way, we became interested in children’s books. Jerome came home from the bookstore one day with a pile of books about how to get a children’s book published. We did what they said and lo, before we knew it, we had a book deal. It wasn’t the deal we’d dreamed of in every way–we didn’t get to illustrate that book–but it was a deal nonetheless, and as teenagers just finishing high school, we were ecstatic about it. We just knew that one picture book was gonna make us rich and famous!

Of course, reality eventually set in, and we ended up having to get real jobs. Those jobs took us on new journeys in search of new dreams. I found success as an entrepreneur, and Jerome became an accomplished graphic designer for The Walt Disney Company.

Jerome: Nearly twenty years later, after many detours, we found ourselves in a position to try making books together again. Over the course of a couple years, on and off, while we worked on individual projects, we wrote THE OLD TRUCK and made a dummy for it. During that time, we also assembled a list of agents who represented the sort of work we wanted to make. When THE OLD TRUCK was ready, we sent it to the first agent on the list. He loved it. He couldn’t work with us at the time, though, so he shared it with his colleague, Hannah Mann. She also loved it. After a short call, where we all instantly hit it off, we signed with Hannah, and she found the perfect home for THE OLD TRUCK at Norton Young Readers with our amazing editor and publisher Simon Boughton.

Jarrett: And it’s been a rocket ride ever since!

Jerome: The book was inspired by two things, actually. Growing up in Texas, we saw our share of old trucks set out to pasture. Once I was taking a road trip from Houston to Austin to visit Jarrett and the sight of one of these trucks got me thinking about what its story might have been. That was the first inspiration. I thought it might make for a great picture book. When I got to Austin, I mentioned the idea to Jarrett.

Jarrett: I liked the idea immediately. It got me thinking about the family that might own that truck, which got us thinking of our own family in turn. That was the second inspiration. There was this thread of grit and perseverance that ran back through generations of our family. Especially the women in our family. One of our great-grandmothers on our mom’s side could have passed for white, but proud as she was, she’d walk clear across town–past numerous white-only facilities–to use the colored ones. Another great-grandmother saved up the money she earned picking cotton so she could buy her own farm in Louisiana. Both our grandmothers worked at the US Post Office in the segregated South. They each had to face and overcome racial and gender discrimination. And then there’s our mom. She was determined to have a large family and a career. She got the four boys she’d always wanted and, working with our dad, built one of the most successful cosmetic dental practices in the country. We were raised by these incredible women to firmly believe that if you dream big, work hard, and persist through the challenges, nearly anything is possible. We hope the family in the book represents that spirit.

Jarrett: Our family is our greatest source of inspiration. Pretty much anything we do has some element of family in it. It’s that important to us.

Jerome: Our next book, THE OLD BOAT, was inspired by our grandparents. We used to go fishing in Galveston with our grandmother on our dad’s side, and we got an old boat from our grandfather on our mom’s side. Between them, we gained an appreciation of the natural world and a sense of responsibility for it. That inspired a book.

Jarrett: We used a mix of traditional and digital media to make the artwork in THE OLD TRUCK and THE OLD BOAT.

The process starts with sketches. 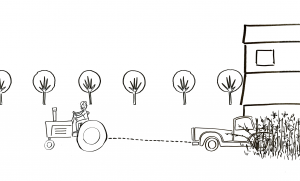 Then we turn those sketches into stamps that we make ourselves. (We made nearly 600 between both books.) 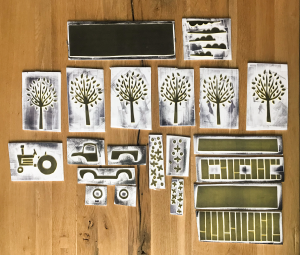 Next, we make prints with the stamps. We use black ink to maximize contrast. 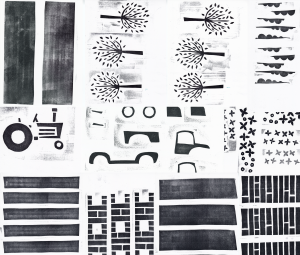 We scan the prints into the computer to composite the final images. 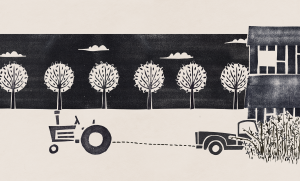 And then we add final details and color.

Jerome: We decided on stamps for a few reasons: 1) We just like the look we get. The rough edges, the texture–we love it all. 2) There’s a lot of visual repetition in these books. While we made a rule that we’d never use the same stamp on the same spread twice, we did allow ourselves to use the same stamp on different spreads. For instance, the truck on every spread of THE OLD TRUCK was made with the same stamp. So stamps made sense because we often made the same print of a thing over and over again. 3) Lastly, we both made the artwork in these books. And as collaborative processes go, we found stamps and printmaking to work the best for us. Jarrett could be cutting a stamp while I drew another one. Or I could be making prints while he was scanning them. And vice versa all around. The process fit us and, in particular, these books perfectly.

Jarrett:  Our agent invited us to make the Writers House holiday card this year. We used the same printmaking process we used in the books and captured it on video. It should give a good idea of how we work.

THE BUZZ (for THE OLD TRUCK)

“This heartfelt celebration of resilience in the face of change, with a determined black woman at its center, packs a powerful punch. As the old truck stays with its family, this charming book will stay with readers.”

“A celebration of diligence and grit, the quiet text conjures a cyclical Giving Tree–reminiscent relationship, but with a healthier, deeply loving dynamic.”

“The simple text in this gentle chronicle of years blazes with the power of family, determination, and perseverance.”

“A quietly powerful ode to hard work and perseverance…Place this beauty on a low shelf with easy access. It will likely be in regular circulation among discerning young readers.”

“The Pumphreys allow their retro, earth-toned illustrations room to breathe in an uncluttered, gently paced presentation. The illustrations are infused with cheer and playfulness.”

“This charming debut is…a simple, beautifully constructed story about continuity and ingenuity…The Pumphreys have created a book that’s both timeless and au courant.”

NPR Weekend Edition: Ever Wonder About That ‘Old Truck’? 2 Brothers Wrote Its Backstory